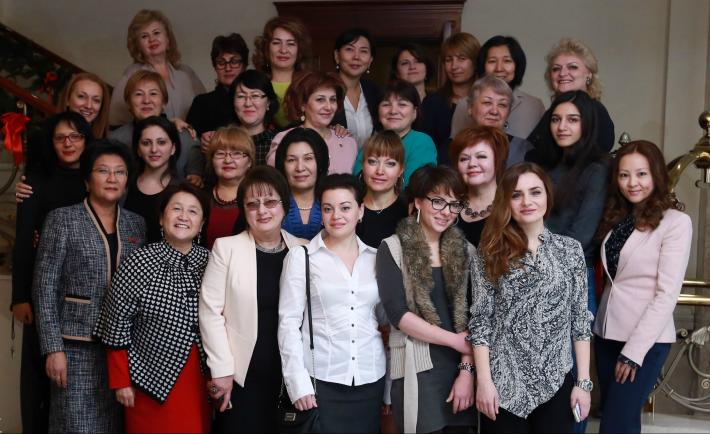 Armenian, Kazakh, and Kyrgyz women activists gathered to learn about holding governments accountable for the impact of laws and policies on women in particular.

Too often, politicians (and candidates) fall into a particular trap when attempting to address inequality and inequity in their societies. It is tempting to believe that a rising tide will lift all boats, and that politicians can address inequity without ever using words like race, gender or religion. It’s more comforting that way, because they never need to have difficult conversations about why a certain group remains underrepresented in government or overrepresented in poverty. More and more often, however, activists are demanding that governments look at those issues and consider how policies and laws impact disadvantaged groups particularly, not just as part of the whole.

One area in which activists have recently demanded greater transparency is gender equity in public policy. Rather than simply accepting that government policies and legislative priorities are good for women, activists are employing Gender Responsive Budgeting (GRB), a method of analyzing budgets that seeks to understand and compensate for the disparate impacts government spending has on people of different genders. GRB is not just about the content of budgets; it is about how budget decisions are made and who makes them. By taking a holistic and participatory approach to budgeting, GRB can impact women’s lives in countries where half-hearted government gender policies fall short.

Much like their Soviet forebears, women in Eurasian countries often enjoy strong legal protections on paper, but find that official promises fall flat at the implementation phase. In the two decades since the former Soviet states achieved independence, disparities between men and women in income, employment, political participation and protection from violence have widened. In such a cultural context, where rhetorical support for gender equality belies real injustices, GRB addresses a crucial question: what happens when policy doesn’t lead to results?

This December, women activists from Armenia, Kazakhstan and Kyrgyzstan came together for a four-day GRB workshop sponsored by NDI to begin wrestling with this problem. More than 30 participants gathered in Bishkek, Kyrgyzstan to discuss the theory and practice of GRB, and to jointly develop GRB programs for implementation in their own countries.

The most refreshing sight? All of the activists, organizers, MPs and trainers in the conference were women.

At the conference’s end, the participants returned to their respective countries with new contacts, new skills and improved plans to implement creative GRB projects at home. In Armenia, the Caucasus Institute plans to counter gendered stereotypes in the media by educating journalists about the impact of local and national budget priorities on women. The Kazakh organization “Status” intends to use GRB tools to engage relevant policymakers about women’s lack of access to financial products such as bank loans and savings bonds in that country. In Kyrgyzstan, a coalition of six organizations is cooperating to train rural women activists and local candidates on GRB.

With the help of small grants funded by NDI, these projects will have a real impact on the lives of women in Armenia, Kazakhstan, and Kyrgyzstan, and the relationships formed and skills learned at the conference in December will help this group of passionate activists fight for a more equal future.

Kristina Jeffers
Kristina is a program manager on NDI's Eurasia team, and works primarily on Armenia, Azerbaijan, and regional initiatives.  She joined NDI in 2006, after finishing her graduate studies and following...
Connect with the author