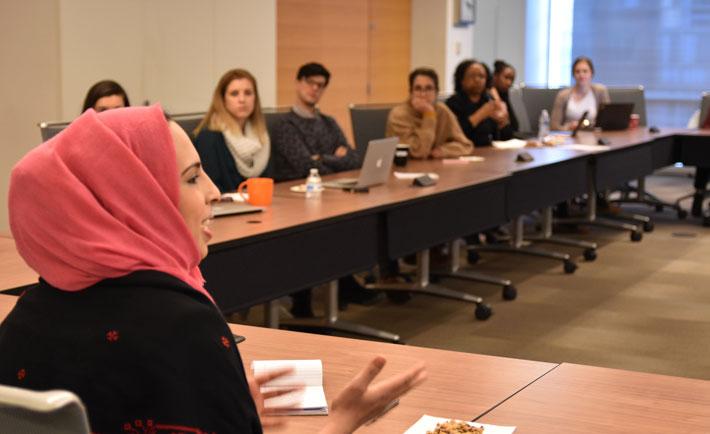 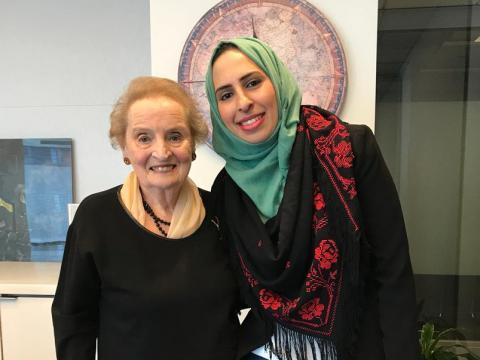 An opportunity to travel from Palestine to the United States was almost an impossible dream for me. When I applied for the 2018 Andi Parhamovich Fellowship Award, I was not very optimistic that I would win. I said to myself, if NDI needs to choose one young woman leader from the whole world, they won’t pick someone from Gaza because they know that traveling out of the country is almost impossible for Gazans. So when I was selected as the recipient of the award, I felt that I was the luckiest woman this year. It was indeed a dream come true. I felt that I was finally breaking through the walls around me to see the world which I have always wished to see.

Receiving the Andi Parhamovich Fellowship at NDI made me hopeful again. In fact, it felt more like being born again. As a young woman who has survived three wars and twelve years of siege, I had reached a point in my life where it felt like life had no more meaning. However, this fellowship changed that: it taught me that we should never stop fighting for our dreams and that walls and barriers can be overcome.

Traveling in and outside of Gaza is a very complicated process. Permission to leave can take days or months. It was even more challenging for me because I had my two young children with me, Maria, who is four years old and Salma, who is six years old. But even as we made our journey, I defiantly believed that what I would gain at NDI would be worth the many hardships we faced.

Before coming to NDI, I was working as an advocacy media officer with the Gaza Community Mental Health Programme. It is a non-profit organization that provides specialized psychological support to victims of human rights violations. Part of my work is to advocate for women’s and children’s rights. In addition to raising awareness about protecting women from violence, I have also worked as a translator with NDI and other international organizations in Gaza, and I have experience working in the humanitarian field, journalism, and teaching English.

In Gaza, we have very talented, motivated and skilled people, but unfortunately, they have no opportunities; the unemployment rate is more than 50 percent. That’s where the idea of my project, “Sharki” – which means “participate” – came from. It focuses on building a network of empowered young women as future leaders by enhancing their professional leadership skills and increasing their participation in civil society. Despite all the challenges young Gazan women are facing, they work tirelessly and continue to fight for their dreams. I believe that this project will be a starting point, a small push in changing the lives of the younger generation in Gaza. It will help to restore hope and motivate them. I also hope to open the door for more young women in Gaza to connect them with young women in the United States, so that they can share their experiences and exchange cultures as a way of transforming their lives.

I have always admired NDI Chairman Madeleine K. Albright, listened to her talks and been inspired by everything she represents. Meeting her and talking to her at NDI was a key moment in my visit. Albright has said: “I was taught to strive not because there were any guarantees of success but because the act of striving is in itself the only way to keep faith with life.” This was true for Andi Parhamovich who kept faith with life by following her passion to work on women’s empowerment. I go back to Gaza more empowered, with more skills and a new determination to follow in her footsteps by doing my part to empower young women in my community.