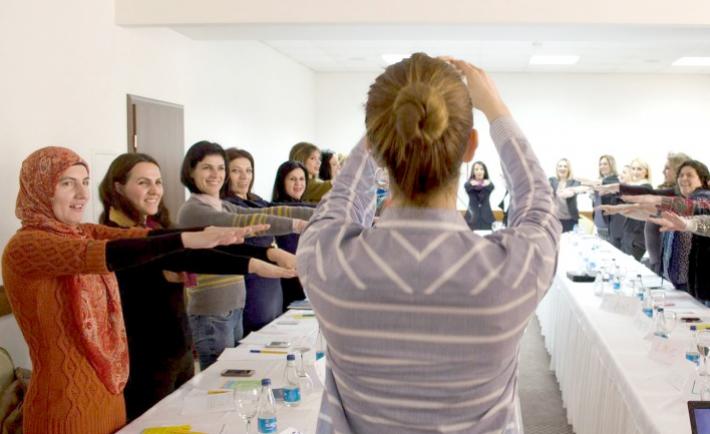 Cross-party training events like this one, part of the Women Political Empowerment Training conducted by NDI, would have a bigger impact if political parties in Kosovo became more inclusive and created a space for women and youth.

In a small country like Kosovo, in order to “get things done,” you need to be affiliated with a political party, understand how to navigate the political system and lobby hard for your cause. None of these requirements would be an issue if ideologies and policies were at the heart of discussion and negotiations. Instead, party affiliation in Kosovo is based on business relationships - not policy - and this political culture undermines internal party democracy. It diminishes party internal dialogue, policymaking and discipline, and replaces it with direct clientele relations. As a result, the power of political parties as interest groups that represent certain values and views is reduced.

Over the past decade, some parties have taken measures that, in theory, suggest a greater commitment to promoting internal democracy and define ideological positions. It is important to note, however, that today no party has developed the expertise, resources or strategies to implement policies that promote inclusion of underrepresented groups. While having formally entrenched mechanisms in their statutes to include women and youth, there are still structural and practical obstacles that keep these groups excluded. These so-called inclusion mechanisms, instead of being the substance of what makes parties relevant and valuable to democracy,  are completely hollow.

In Kosovo, where a quarter of the population is disengaged, our political parties know that they need to increase their universe of support among citizens. In order to do this, they need to become modern parties that speak to issues that are important to citizens’ daily lives. They need to make room within the party for a broad tent, including, but not limited to, women and youth. Some parties have made a start or made a commitment to greater internal democracy.

On paper, parties continue to appear democratic, modern and in line with European party standards. In practice this is still a long way from reality; there is a gap between what is on their statutes and how parties actually operate. They have often touted it as a fulfillment of European standards, but in reality, political behavior betrays the expectations of citizens and party members.

The practice of internal candidate nomination is one example of how parties could be more inclusive. Currently, rather than involving party members and activists, party leadership and strong branch leaders/mayors meet privately to hand select candidates. The 2007 introduction of direct voting in mayoral elections raised expectations that local branches would have more power and would be able to counterbalance the role of party leadership as sole decision makers in the candidate nomination process. Instead, local branch leaders still ended up controlling candidate nominations. Often, they failed to follow the party vision or create enough space for underrepresented groups, which has undermined the democratic process.

This approach of local branch control has led to the “bunkerization”of political parties in Kosovo (In this context the term refers to a lack of strategic and proactive communication, lack of responsiveness to political circumstances and crises). It has pushed them to violate the core principles of rules for selecting candidates and nominees for party leadership, including candidates for general elections. This “bunkerization” leads to candidate lists containing exclusively male names, which disenfranchises women and youth within the party and prevents them from taking on leadership roles. As a result, parties have transformed from intended democratic organizations capable of promoting ideas and candidates based on popular support to vehicles for the advancement of political entrepreneurs - businessmen who engage in politics to enrich themselves. Effectively, political success within a party relies on more on money and relationships than ideas and ability.

How is this practical experience diminishing Kosovo’s political party system? -- We have seen it in the last two years, impasse after impasse, crisis after crisis.
First, parties without strong internal democratic practices and accountable leaders are not able to shape the public agenda based on political arguments. They end up ignoring the parliament when in power or abusing parliamentary mechanisms when in opposition.

Second, ideally government leadership is supposed to represent large interest groups and citizens who have won elections fairly and govern justly. Recently, some leaders acquired power through political parachuting and shortcuts, representing individually a much smaller and narrow group of interest.

Third, the political reality of Kosovo is designed to meet imperatives other than the expressed will of the people. In the last election, large numbers of voters expressed urgency in changing the people who had governed since independence in 2008, and research showed that was the likely outcome. However, through unpopular negotiations and opaque deals, a six months political crisis effectively returned the old government to power, though with some mixing of ministries and government positions.

Fourth, uncertain election results are not in and of themselves a problem when the overall political culture allows for open discussion and negotiation, which takes popular will, though nebulous at times, into account.  In the rush to power, opaque and secretive deal-making, and political intrigues become the domain of a narrow group of politicians. As such they are less beholden to the electorate as they are two narrow interest groups that are funded and supported by political entrepreneurs and party leaders. The effect has created a polarization among a narrow group of political actors who have used their influence to thwart rivals in government and parliament, bringing unneeded crisis and dysfunction to Kosovo’s political system.

Finally, it is important that Kosovars reflect on the developments which have brought us to the current state of affairs. Our initial aspirations for democratic life were both noble and universally desired, but along the way, unfair practices have turned our political system into one that contributes little to democratic life. As we reflect, we should be honest and seek remedies to the dysfunctions.  We will require political leadership savvy enough to understand that inclusion within a political system is most effective way to build strong and durable support. Until then, the façade of democracy will remain in paper form only, as the powerful use political party statutes as a gimmick to claim progress and modernity, while the practice is anything but.

By not recognizing the places where our political parties are failing and working to strengthen the internal processes, we are slowly destroying what we have built here in Kosovo.