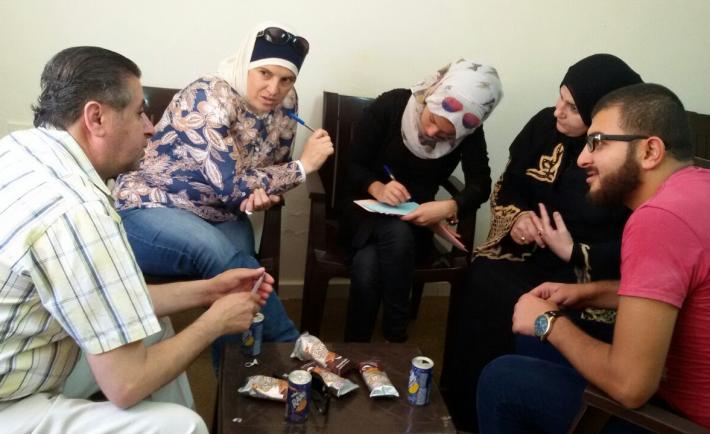 Conflict thrives in divided societies, particularly when individuals in positions of power exploit differences for personal or political gain. Many factors, including scarcity of resources and recent histories of intergroup strife, can further exacerbate divisions and drive citizens apart based on political, ethnic, religious and other identity factors. When allowed to deepen, these divides threaten social cohesion and undermine the foundation of cooperation and collective action in democratic societies. As polarization increases, so do the challenges faced by governing institutions. Strengthening inclusive democracies can reduce polarization and bridge intergroup divisions by bringing communities together to pursue shared interests and to develop sustainable intergroup relationships. 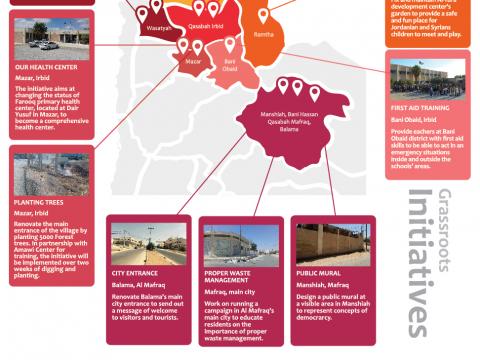 Since the outbreak of the Syrian civil war in March 2011 Jordan has hosted hundreds of thousands of Syrians fleeing the violence. There are 655,990 Syrian refugees registered with the UNHCR in Jordan. However, estimates of unregistered refugees often exceed one million. Approximately one in eight people living in the country is a refugee. The influx of refugees--the vast majority of whom live outside UN camps--has burdened Jordan’s already strained resources, infrastructure and economy, resulting in increased tensions between Syrians and the Jordanian communities that host them.

To address these challenges, NDI launched the program, Ana Usharek Mujtam3i (“I Participate-My Community”) in May 2015. Ana Usharek Mujtam3i aims to bridge the divide between Syrian refugees and Jordanian host communities by providing a venue for dialogue and collective civic action. Syrians and Jordanians gather for NDI-facilitated discussion forums on topics including democracy, human rights, conflict resolution and gender. As the program progresses, participants learn to work on solving local problems, identify issues affecting the community and plan joint initiatives to address them. Through these activities, Jordanians and Syrians work side by side, utilizing grassroots organizing and advocacy skills to achieve common goals. According to one Syrian Ana Usharek Mujtam3i participant, “We’ve been neighbors with the Jordanian participants for some time now but we’ve never had the chance to interact. The program brought us closer. We’ve become friends and we meet after the sessions.”

Ana Usharek Mujtam3i is currently implemented in 165 neighborhoods throughout Irbid and Mafraq governorates, which have some of the highest concentrations of Syrian refugees. While the primary objective of Ana Usharek Mujtam3i is to address issues related to Jordan’s current conditions, the program also provides the added benefit of equipping Syrians with practical knowledge about democratic practices and civic participation that will be crucial in Syria’s eventual post-conflict transition. Despite the prolonged duration of the Syrian war, repatriation remains a top priority for many refugees.

NDI conducts similar programming in Kosovo, where Albanians and Serbs remain deeply polarized nearly two decades after the end of the violent interethnic conflict. To build relationships between the two groups, NDI uses a people-to-people approach and focuses on engaging young people on economic and social issues that they care about and which transcend ethnicity, such as traffic safety, recycling and preventing bullying in schools. Hundreds of Albanian and Serb youth have participated in NDI community development and mentoring programs that build their civic skills while creating ties across communities. Change has also taken place on a more personal level. As one participant put it, “I could imagine that through this process we would start to understand each other, but I never thought that we would reach a situation of sharing deepest feelings and emotions.”

Additionally, in places like the Central African Republic, which has suffered in recent years from intercommunal violence, NDI provides assistance for local activities promoting social cohesion and peaceful interactions. This approach involves stimulating discussion on the democratic values and community priorities both Christian and Muslim Central Africans share and supporting peaceful citizen engagement in the ongoing political transition. These initiatives have been part of a range of peacebuilding achievements: for example, NDI and local partners contributed to Christian leaders facilitating the return of Muslims who had earlier fled the community.

In Jordan, Kosovo, the Central African Republic and elsewhere, NDI supports communities across political and identity-based divisions in order to solve shared problems and to enjoy shared successes. By working together, breaking down prejudices and repairing social cohesion, these initiatives form the basis for democracy to thrive.

Editor’s Note: Ana Usharek Mujtam3i is funded by the United States Agency for International Development (USAID) through the Consortium for Elections and Political Process Strengthening (CEPPS). NDI’s work in Kosovo has been funded by USAID and the National Endowment for Democracy (NED). Programming in the Central African Republic is funded by the NED. Lauren Kitz also contributed to this post.

Ben Malick
Ben Malick is a program officer on the Middle East and North Africa team, where he supports the Institute’s programs in Jordan and Libya. Prior to joining NDI, Ben served in the US Marine Corps as an...
Connect with the author
LinkedIn
NDI