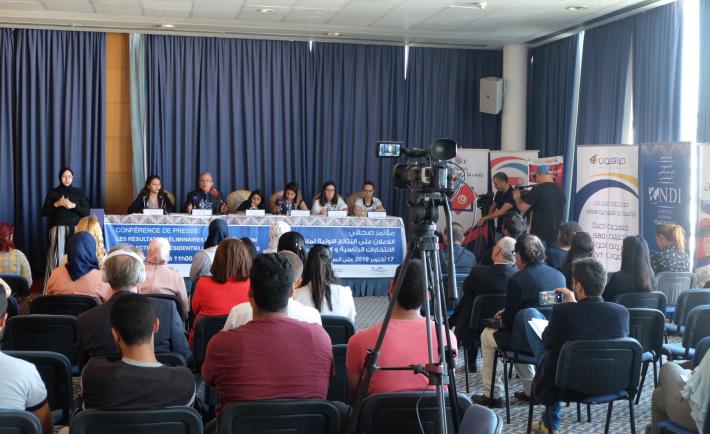 Representatives of six Tunisian election observation groups held a joint press conference on October 17 to deliver their assessments of the 2019 elections. From the start of voter registration in April to the conclusion of electoral appeals in November, the groups organized a coordinated effort of each phase of the electoral process. 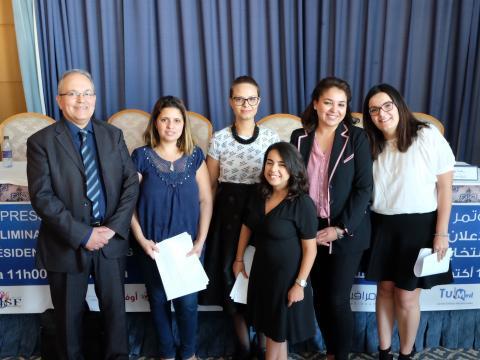 Representatives of JSF, Mourakiboun, TUMED, Chahed, Ofiya and IWatch pose for a photo after a press conference on October 17.

As Tunisian citizens went to the polls to elect a new president last month, citizen observers were present in large numbers, including non-partisan observers, pollwatchers representing candidates, and international monitors like the delegation led by NDI and International Republican Institute. Since only two candidates were competing in the presidential run-off election, the total number of candidate agents declined significantly compared to the prior elections simply because there were fewer candidates contesting for positions. Misinformation began to spread that the elections were going unwatched, but non-partisan observers were out in numbers equivalent to the September 15 first-round presidential and October 6 legislative elections.

For citizens who had not anticipated this decline in the total number of partisan pollwatchers, this change seemed to have had the effect of reducing voters’ willingness to participate in the process. Reports emerged of citizens refusing to vote unless an observer was present in their polling station. These rumors had the potential to threaten citizens’ confidence in the integrity of the electoral process, and potentially lead to reduced voter turnout. Tunisian civil society groups noticed the problem emerging on social networks and, on the morning of the election, decided to act.

NDI supported six citizen observer groups in Tunisia that have worked together since 2017 to achieve more extensive and coordinated coverage of the electoral process. At 9:00 AM on election day, one of these groups proposed a Facebook statement, which would affirm their presence in Tunisia’s polling stations. Shortly thereafter, all six organizations’ Facebook pages featured a statement confirming their collective election-day deployment of 6,005 citizen observers across all electoral districts.

In their 2:00 PM press conference, the citizen monitoring groups confirmed their total deployment of over 6,000 observers on election day – the same number as in prior elections. The groups described how they use complementary methodologies that serve to cover the process more broadly. For example, one organization conducted a statistics-based observation using fixed observers in polling stations, while another deployed mobile observers who focus on polling centers’ surroundings, while yet another focused on more vulnerable, rural areas and the participation of women.

The press conference earned 7,300 views on Facebook, and media outlets began to pick up the story. The election commission, or ISIE, reposted the groups’ Facebook statement on their official page and referred to it in a press conference. As the afternoon progressed, the misinformation began to diminish, and the turnout forecast looked increasingly positive. Ultimately, the run-off election featured a higher voter turnout than the prior two contests, reaching 57 percent of registered voters according to estimates.

Each election presents its unique challenges, and some are more predictable than others. The collaboration that these six observer groups have developed since they began to work together has resulted in a platform for rapid and coordinated communications. Citizens’ strong desire to see observers in their polling stations confirms the expectation, set in Tunisia since the 2011 revolution, that elections must be conducted fairly and closely watched by citizen observers.