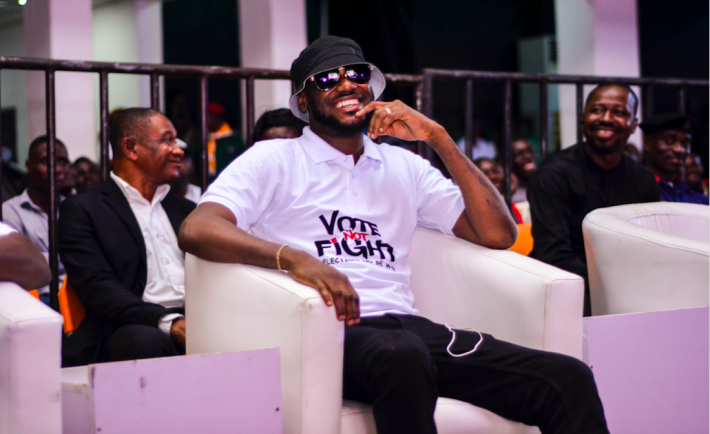 2Baba participates in the Peace Concert in Bayelsa ahead of the state elections. 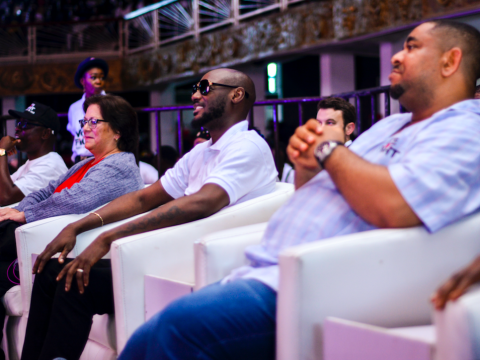 Election-related violence is a major challenge that Nigeria has been grappling with for a while now. Election related deaths have robbed many citizens of their lives, particularly youth, who have played dual roles as perpetrators and victims. In 2011, the Human Rights Watch (HRW) reported that 800 Nigerians had been killed in the post-election violence that followed the general elections of that year. This and many other incidents of electoral violence across the country informed the development of the Vote Not Fight campaign, whose objective is simply to reverse the role of youth as perpetrators of violence to leaders of the campaign against it. 2Baba, one of Africa’s greatest music exports, was a natural choice during the process of identifying a suitable Ambassador from the campaign. True to our expectations, he jumped in without any delays.

Under 2Baba’s leadership, the Vote Not Fight campaign has reached 62 million Nigerians with its message of non-violent elections and encouragement for increased youth participation in elections. In times when many believe the spirit of volunteerism is at its lowest ebb in Nigeria, 2Baba inspired 1,706 youth to actively volunteer on the campaign from 2014 to 2019.  While electoral violence has not been eradicated, it can be said that Innocent Ujah Idibia (Aka 2Baba) is leading a campaign that is changing young people’s attitudes towards violence and has begun to reduce election-related violence in Nigeria. An independent retrospective study commissioned by a partner Youngstars Foundation after the 2017 governorship election in Anambra state stated “The use of celebrities like Tuface Idibia as VNF ambassadors and the visit of Tuface Idibia to Anambra state also contributed tremendously to the awareness and acceptability of the VNF peace messages by the public and the youths in particular.” If this was the positive feedback after one election, imagine what citizens had to say about the impact of his leadership for the Vote Not Fight campaign during the two general elections and the off-cycle governorship elections in Kogi, Edo, Anambra, Ekiti, Osun, Bayelsa States.

Being a brand ambassador for a charity like the Vote Not Fight campaign pro bono comes with great commitment, passion and sacrifice. His dedication has even resulted in him having to refuse shows or paid appearances. I must also say that 2Baba is not only a volunteer for the Vote Not Fight campaign, he is a youth Ambassador for the Independent National Electoral Commission (INEC) and amongst other citizen mobilization groups. As Innocent Ujah Idibia (Aka 2Baba) celebrates 20 years of producing excellent music and service to Nigeria, I will like to say the time to invite him to the National Peace Committee is now. He has earned it as a model citizen whose modus operandi is undoubtedly giving back to society.

Bem Aga
Bem is a Senior Program Manager for NDI in Nigeria, based out of Abuja.