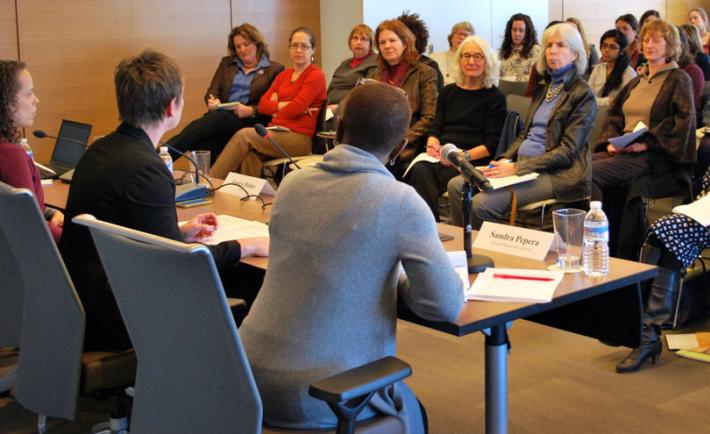 Glancing around the room, it seemed that the Feb. 24 event that NDI’s Gender, Women and Democracy (GWD) team put on had a great turnout. About 60 people from the federal government, academic institutions, multilateral organizations and NGOs were present. Despite the impressive attendance, one startling detail caught my attention as everyone took their seats: nearly everyone was a woman – there was one man on the panel and only two male guests in the audience. This, to me, spoke volumes about the state of the movement for women’s empowerment and gender equality.

The event, co-hosted by the Society for International Development (SID), explored progress made toward one of the outcomes of the Fourth World Conference on Women in Beijing 1995—Increasing Women in Power and Decision-Making. The panel generated a lively discussion, moderated by NDI’s GWD Director Sandra Pepera. Susan Markham, senior coordinator for gender equality and women's empowerment at USAID, presented USAID’s approach to the issue and talked about transforming political party structures to create space for women. Jessica Huber, senior gender specialist at the International Foundation for Election Systems (IFES), focused on the need to increase the representation and voice of the often disenfranchised population of persons with disabilities and efforts to insert women into peace processes. Aaron Azelton, NDI’s director for citizen participation, reminded us that average citizens have to be convinced that most of their concerns are best addressed through improved democratic governance, and suggested that human rights and political organizations need to work more closely on women’s empowerment.

Looking at all the women in the room (and the three men), I realized that without intending it, our event became a microcosm of the field of gender equality activism. Despite many men in elected and executive positions of power expounding on the importance of women in politics, men are still largely absent from everyday discussions on this issue, and the vast majority of the people involved in the movement for change are women.

The fact is that the gains that have been made in women’s political empowerment have all involved persuading men in political parties, parliaments and governments of the positive economic and social benefits of gender equality. In answer to a question, Markham remarked that one effective mechanism has been to highlight the economic cost of continuing to prevent women from fully participating in political and economic life, and the economic gains from increasing their involvement.

So the question is: What can those of us in the field of women’s empowerment do to get more men to join the fight for gender equality? I believe there is a lot to be learned from organizations that seek to understand men’s attitudes toward women as the entry-point for social change – an example that comes to mind is Promundo. Its program model, which integrates men and boys in programs to end violence against women, shows incredible promise.

But I think the most important step is to keep having conversations with men about this topic and convincing them of the benefits to all of us. It’s a difficult undertaking, since many men rarely even think about gender. As professor and gender relations expert Jacqui True said in 2010, “When you’re left out of the club, you know it. When you’re in the club, you don’t see what the problem is.” Gender equality is often misinterpreted as primarily a fight for women to lead. Without faster progress and help from male colleagues, achieving equality in decision-making will take another 30 years. None of us should wait that long.

Erin Douse
Erin Douse is a project assistant for the Gender, Women and Democracy program at the National Democratic Institute. She has a masters in international development from Georgetown University,...
Connect with the author
LinkedIn
NDI