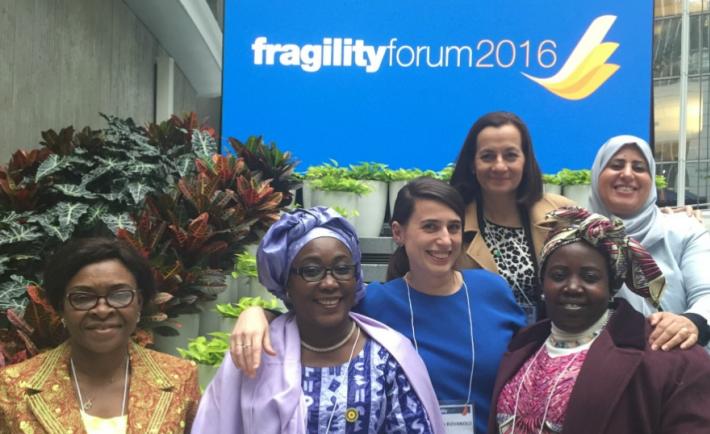 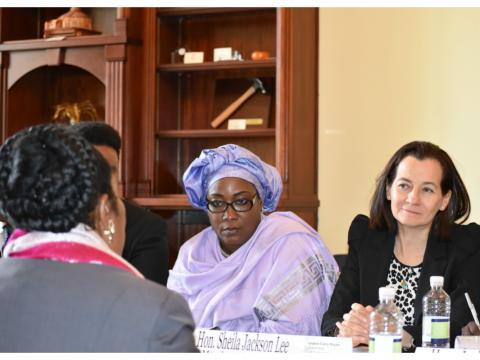 In fragile and violent places, whether it is Colombia, Libya, Mali, Nigeria, or South Sudan, the role of women during crisis, war, and post-conflict reconstruction has been critical. Conflicts often force women to get organized and to safeguard the basic necessities that bolster day-to-day life in each family. They also participate in fighting wars, and in rebuilding their communities. Women act as peacekeepers, relief workers, and mediators.

Yet, when peace talks occur, women are not invited to the table and peace agreements are often drafted without the critical perspectives of women. In fact, only 92 out of 585 peace agreements signed from 1990-2010 contained any reference to women at all. More than 50 percent of peace agreements fail within five years of signature, in part, because women are absent from peace negotiations and peace talks. Excluding women from political, social, and economic life makes sustainable peace a more elusive goal, while fragility, instability, and continued violence, exacerbated by weak and undemocratic institutions, perpetuates an exclusionary attitude towards women.

With this reality in mind, under USAID’s Global Women’s Leadership Program (GWLP), NDI brought a delegation of women members of parliament (MPs) to the World Bank Group Fragility Conflict and Violence Forum 2016 (also referred to as the Fragility Forum) in Washington, DC in early March. The goal of this GWLP delegation, the second organized by NDI and the Brussels-based Women in Parliaments Global Forum (WIP), was to forge coalitions and expand networks, enabling the MPs to more effectively address issues of fragility and conflict when they return to their home countries. The first GWLP delegation attended the United Nations Climate Change Conference (COP21) in Paris in December 2015.

Nominated by WIP and the NDI offices in their countries, the GWLP delegation members in Washington were:

When the delegation first arrived in Washington, NDI’s partners at the Institute for Inclusive Security facilitated a day-long advocacy and message development training. The workshop prepared  them to participate and engage at the Fragility Forum, where the GWLP parliamentarians attended dozens of panels, and were able to engage in many meaningful discussions that will help shape their work back home. On a panel entitled Gender Disparities in Fragile States, Clara Rojas shared the political, social and economic challenges that women in Colombia face.

Saroj Kumar Jha,the Senior Director for the Fragility, Conflict and Violence Group at the World Bank, welcomed and hosted the GWLP delegation.  He strongly reaffirmed the role of women parliamentarians in addressing the issues of violence and conflict in fragile states, and facilitated the delegation’s participation in the final plenary of the Fragility Forum. The delegates’ powerful closing remarks  responded to the six development challenges that World Bank President, Dr. Jim Yong Kim, had posed at the Fragility Forum’s opening plenary.

Outside the Fragility Forum, the  GWLP delegation members also interacted with several other high-powered women leaders. They had the opportunity to meet H.E. President Catherine Samba Panza of the Central African Republic, for whom NDI hosted a lunch with senior members of the Washington foreign policy and international relations establishment. They also visited Congresswomen Sheila Jackson Lee and Karen Bass on Capitol Hill, where the delegation and the congresswomen exchanged stories about the journeys they had taken in becoming women legislative representatives and found commonalities in their shared experiences.  The bonds of solidarity forged between the seven women that day are a successful testament to one of USAID’s core objectives for the GWLP program.

This extraordinarily strong delegation of women parliamentarians impressed everyone they met with their commitment to keeping the fragility, conflict, and insecurity which undermine their countries at the forefront of the global discussion. Each woman spoke with knowledge, understanding deeply that there are no quick or easy fixes. But they also reaffirmed their intent to work tirelessly, leveraging their newly established global connections  to strengthen their participation in the critical processes of peace and transition back at home -  in Colombia, Libya, Mali, Nigeria, and South Sudan.

Besa Rizvanolli
Besa Rizvanolli is a Senior Program Assistant on the Gender, Women, and Democracy team at NDI.
Connect with the author
LinkedIn