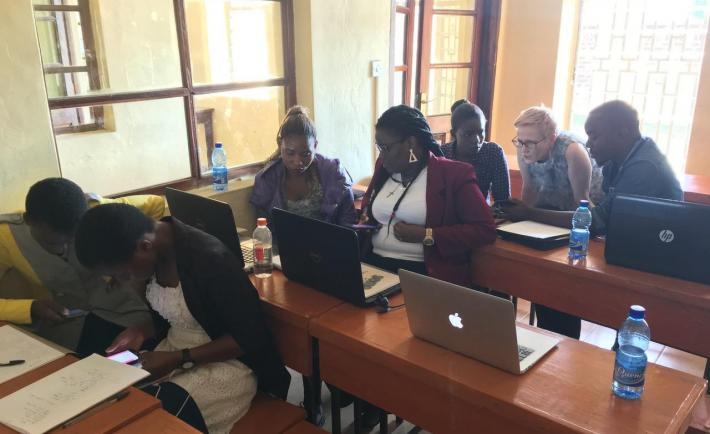 Malawian journalists at the Malawi Institute of Journalism combating disinformation during the Malawi elections.

This animated video was produced by IWPR to raise awareness about the fact-checking website: www.fakewatch.africa

The 2019 Presidential elections in Malawi were anticipated to be the closest elections in history for the country, and therefore, there was heightened interest, especially internationally. When an image of Tweet claiming to be from the President of the United States expressing his political preference for a particular Malawian presidential candidate was circulating, I knew the information environment was rapidly changing in Malawi.

It was deep into campaign season in the southeastern African country of Malawi and a disturbing new trend emerged: digital disinformation. The constant, relentless false news stories were being spread via social media and across platforms like WhatsApp at an alarming rate. Though false news stories meant to deceive the electorate can be common around elections, especially around the electoral process and candidates, the excessive rate at which it was spreading in Malawi caught us all by surprise.

Before coming to Malawi, NDI and the Institute for War and Peace Reporting (IWPR) were already collaborating on a Consortium for Elections and Political Process Strengthening (CEPPS) media monitoring project in Malawi connected to the country’s tripartite elections (presidential, parliamentary, and local council elections). As the elections got closer, a rising level of disinformation was circulating through the country. There was an urgent need to expand the scope of the original media monitoring project to include additional support to combat disinformation campaigns in Malawi.

Less than 72 hours after funding was approved, my colleague – a skilled international trainer in combating disinformation – and I were on the ground in Malawi. We spent the first two days training the team and officially named the project, “Fake Watch.”

The Malawi Institute of Journalism (MIJ) had graciously donated a classroom for us to work from. Together with a team of Malawian journalists, we created a “war room” to tackle the spread of false news in the country. In the “war room,” we developed a system for how we intended to eliminate this issue. The three-part process consisted of the following:

For instances with fake tweets, the team forensically examined the users’ timeline using tools such as the Internet Archive Wayback Machine. For some posts, we even had to get in touch with official government organizations to confirm authenticity of certain posts. This is how we addressed each instance of disinformation.

With three weeks of working in the “war room,” the team debunked 70 stories and swiftly established itself as a trusted source for fact checking by election officials, journalists, and even citizens.

In a world increasingly beset by the scourge of disinformation, the FakeWatch team in Malawi had quickly made its mark.