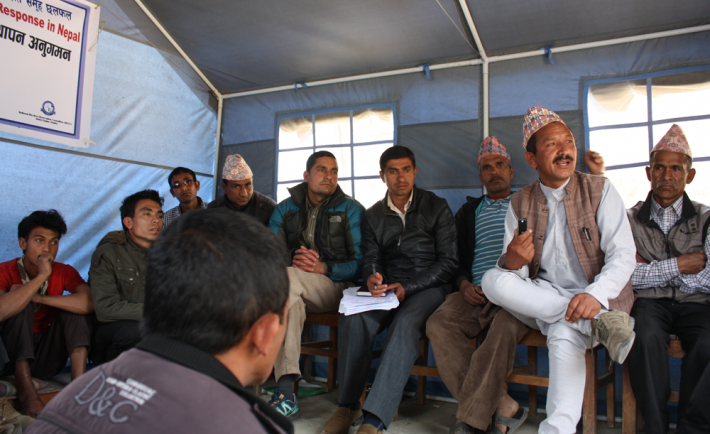 A civil society monitor gathers the concerns of earthquake victims in a temporary shelter. 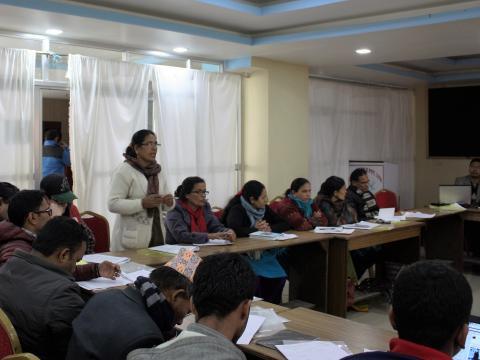 Women in the district of Ghorka express the challenges of women inclusion on government programs. 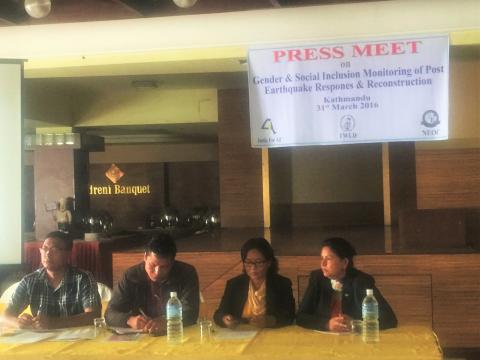 Representatives of the three CSOs, partners of NDI, prepare for a “Press Meet.”
Prev Next

Ordinary citizens and civic organizations become tremendously more active in the community immediately after a tragedy hits their community. This was my experience with my community in Kosovo in the post-war reconstruction in the late 90’s and this has certainly been the case in Nepal after two mega earthquakes last year took close to 9,000 lives, injured more than 22,000 people and destroyed more than 600,000 homes. Nepalis in solidarity with their fellow citizens flocked to help with relief materials, building shelters and reinforcing other people’s homes. The spirit of the community was very high.

But the main burden on long-term reconstruction falls on the government (aided by international donor organizations). The challenge in this massive operation estimated to be $4.1 billion over 5 years going by the motto “building back better” is how to keep citizens informed, included in the process and engaged, and the government responsive to the needs of the affected citizens.

In the aftermath of the earthquakes, NDI's office in Kathmandu strived to do its part in addressing this challenge, within its institutional mission. After close consultations with various actors in Nepal, it decided to support civil society organizations (CSOs) who showed an interest in effectively monitoring the reconstruction process. One of the objectives of the NDI program in Nepal is to support civil society initiatives in monitoring the political process more effectively. By helping CSOs monitor the earthquake reconstruction process, NDI helps improve the political process of earthquake reconstruction, while building the capacity of civil society to conduct more effective monitoring of government in this and other areas.

NDI began to offer assistance to three organizations: Justice for All and the Forum for Women Leadership and Development (FWLD) to monitor gender and social inclusion in the reconstruction process and to NEOC, an election observation network, to monitor the level of citizen consultation and participation in the process and government compliance with policies on reconstruction. Each organization selected three earthquake-affected districts for their monitoring work (14 districts of Nepal were affected by the earthquake out of a total of 75 districts in the country).

From the start, NDI worked with the partner organizations to design monitoring in order to:

In seven months of work in the field, Justice for All and FWLD have held 33 public consultations and surveyed 2,400 affected citizens in six districts. During the same period, NEOC held 25 public consultations, 72 meeting with local officials, and surveyed nearly 2,000 citizens in three districts. The three organizations, which NDI has encouraged to work together as a coalition, have made phone calls to government authorities and held various meetings and press conferences with officials to address the issues of concern arising from their research and consultations.

Single women and widows who lost their husbands in the earthquake have faced particularly difficult challenges because, as women, they were not considered the “head of household,” and therefore could not benefit from some government assistance programs. Government authorities have been receptive to the vocal concerns of civil society on this issue and are increasingly more willing to consider women heads of households as beneficiaries of assistance programs. The civil society organizations also found that there has not been a consultation mechanism or a functional grievance mechanism for earthquake victims and there is low representation of women in reconstruction bodies, both of which present barriers for women seeking disaster assistance.

NEOC’s research has shown that, among other things, gaps in the  government’s communication about its reconstruction programs and the lack of a formal public consultation mechanism have caused miscommunication and suppressed public engagement across all segments of society, and precipitated inadequate oversight of relief and reconstruction funds by local officials.

Nepal marked the first anniversary of the earthquake in April. While government has increasingly taken over responsibility for reconstruction efforts and much of the community spirit in the immediate aftermath has faded, some local organizations are providing the space for citizens to express their concerns, articulate them to the proper authorities, and demand a better government response. NDI is doing its part to ensure these organizations are effective advocates, demanding that government is more inclusive of and responsive to the Nepali citizens, and more accountable to its own plans.