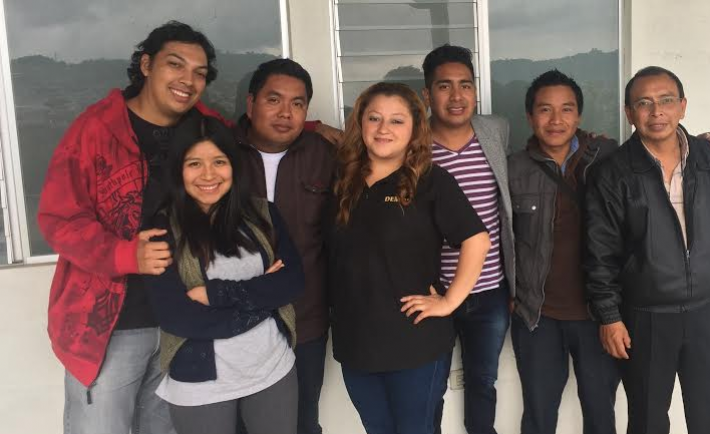 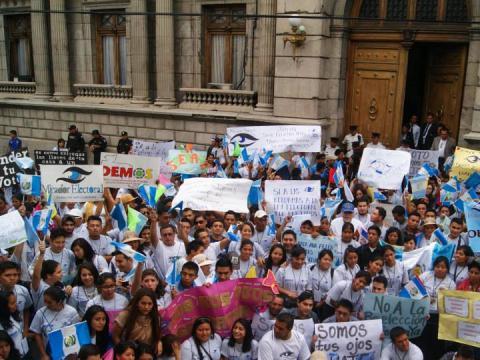 The DEMOS network participates in an observation rally in front of the Guatemalan Congress. 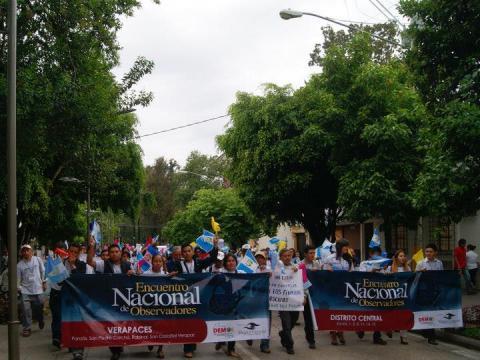 Observers from across the country unite in a march for electoral transparency.
Prev Next

For Yesica Hernández, an observer from Quetzaltenango, playing an active role in political life in her country is a civic obligation. At just 24 years old, Yesica has worked with the Central American Institute for the Study of Social Democracy (DEMOS) for nearly five years and already observed two elections. She sees election observation as critical to involving citizens, especially youth, in politics and holding political parties and politicians accountable to the public.

“We have to participate. If we don’t, we are allowing others to decide things for us,” she explained to NDI in a recent interview. “This process lets us contribute to improving our country and making the system more transparent, which helps reduce corruption.”

“The observation gave me a better understanding of how the country is structured, which gave me ideas of how to improve things in the long-term,” added Fredy Sitavi, a fellow observer from Chimaltenango.

NDI spoke to seven observers from across the country who volunteered with DEMOS to monitor the election process last year in a total of 52 of Guatemala’s 338 municipalities. Each week, the 539 observers completed a survey to document acts of violence and their perpetrators, incidents of voter coercion and abuses of fundamental political rights.

“We have to participate. If we don’t, we are allowing others to decide things for us.” - Yesica Hernández, citizen election observer

As a member of Mirador Electoral, DEMOS compiled local findings and shared them nationally with the press to raise public awareness of deficiencies in the electoral process and identify areas of potential improvement. They also provided recommendations to the election authorities and policymakers, which could be used to reform the country’s electoral laws.

DEMOS then shared the national findings with local observers in regional meetings to help them better understand the realities faced by other communities. As Orlando Cun, an observer from Sololá, explained, “I learned how to analyze the electoral situation and understand in-depth the electoral laws and their limitations. I learned to see actors who influence the political situation who are often not visible.”

In addition to election activities, DEMOS works with citizens on effective communication skills, particularly around advocating for political rights, at the local level. The Mirador election observation also provided its observer network an opportunity to put these skills to use at a national level. The observers that NDI interviewed, which were a small subset of the large group of people who have worked with DEMOS on other issues, were excited to be able to be involved in the elections and utilize their communication skills.

“There are so many young people who don’t have opportunities and we need to make sure that they do in the future.” - Aracsala Chang, citizen election observer

According to DEMOS’ executive director, Anabella Rivera, election observers who participated in their communication trainings were critical to the monitoring process because they were able to effectively disseminate the data and information that the volunteers were collecting. “In a country where there is a culture of silence, it is important for citizens to learn effective communication skills. Democratic communication and freedom of speech are critical to enacting political change,” she said.

Prior to elections, DEMOS also conducted focus groups in the capitals of 20 of the country’s 22 departments to gauge citizens’ political attitudes. It found that most participants were unhappy with the political system and its actors, which many believed to be corrupt, and desired significant reforms. However, they also recognized that the lack of popular participation in decision-making contributed to the current system and the 2015 political crisis. Citizens reported that they would like to be more involved but largely do not know how they can participate in and impact the political system.

Anecdotal evidence from the observers interviewed for this post confirmed the focus group findings. In light of the historic context of the elections, Aracsala Chang, from the department of Guatemala, saw more people, especially youth, who wanted to become involved in the elections, and the Mirador Electoral project provided an avenue for them to start. “I learned so much about the country’s ongoing problems and how youth can contribute to improving them,” Aracsala said. “There are so many young people who don’t have opportunities and we need to make sure that they do in the future.”

Although the elections concluded in October, Yesica views political engagement as a continuous commitment, and she is convinced that last year’s events will continue to inspire people to get more involved. “We need observation beyond the elections,” she said. “For example, we can observe different political processes, like the appointment of judges and other appointed officials. This is starting to happen this year, which is part of the domino effect. This is part of citizens waking up.”