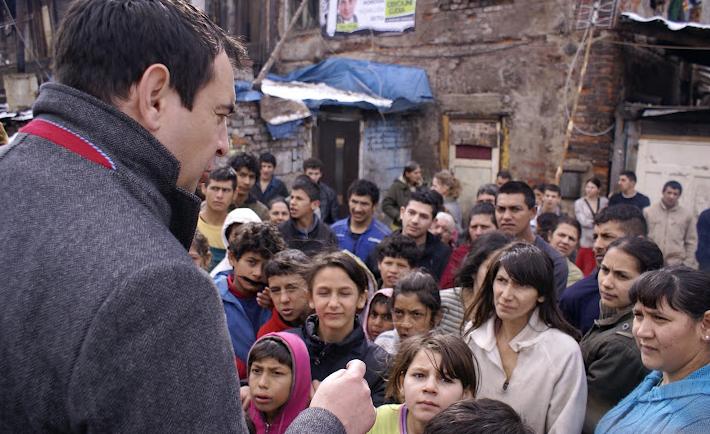 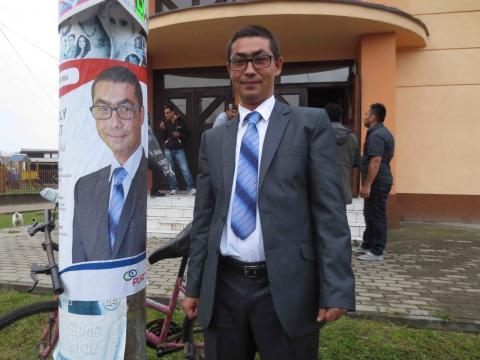 Vojtech Szajko, an NDI alumni, running for mayor of Vcelince in local election 2013 before meeting with his voters. 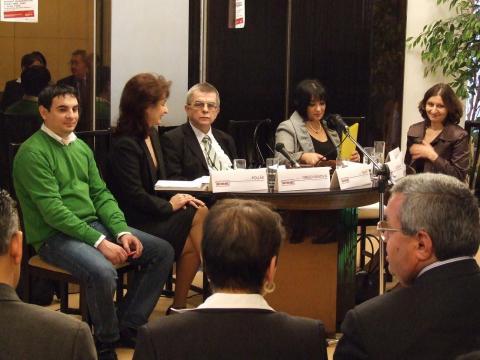 From left to right: Klara Orgovanova, Laszlo Nagy, Anina Botosova and Zuzana Kumanova discuss the role of the government's Plenipotentiary Office for Romani Communities in Slovakia. 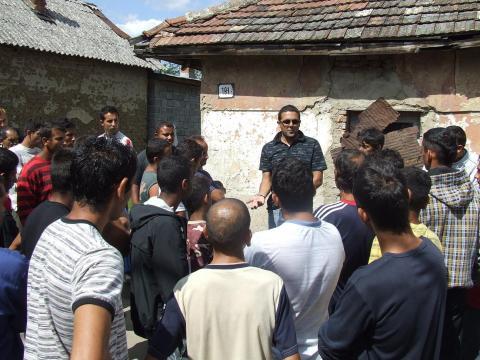 Stanislav Daniel, an NDI alumni, de-escalates tensions in Ostrovany in response to neo-nazi events in a nearby village.
Prev Next

In two days the world will celebrate International Roma Day, which highlights the issues facing Romani people around the world.

The day officially commemorates the first meeting of the International Romani Union and serves as a reminder of the struggles Romani people still face in achieving equal representation and rights.

The Roma comprise close to 7 percent of the population in Slovakia, but they are underrepresented politically, especially in elected office and in mainstream political parties. They face many challenges as they try to use the political process to address the severe economic, social and human rights problems that afflict their communities.

In 2003, in an effort to develop a program strategy for the Roma, NDI deployed an interdisciplinary assessment team to Slovakia. The team recommended that the Institute support integrating Roma ethnic minorities into Slovakia’s mainstream political institutions and processes.

In line with NDI’s objective of increasing the political inclusion of marginalized groups, political mainstreaming enables historically marginalized communities to gain a voice within existing political structures. To that end, the multi-year program was based on two overarching assumptions:

Over the last decade, with funding from the National Endowment for Democracy (NED), NDI has supported Roma political candidates, civic activists and elected officials as they seek to increase their participation in civic and political life.

Ethnic Minorities and Political Mainstreaming - Does it Work?

Over the past 10 years NDI has witnessed many “firsts” through its collaboration with Roma activists: Peter Pollak, an alumnus of an NDI program, became the first Roma member of the Slovak parliament in 2012; Roma youth in Hungary and Slovakia have partnered with non-Roma youth to organize festivals and events that emphasize diversity and collaboration; and Roma elected officials and civic activists have used their respective positions to advocate for improved living conditions in their communities.

Yet political mainstreaming is a complex process. Programs that support mainstreaming must take into account the historic, socio-economic, political and cultural contexts in which they operate. The political abilities of the minority are only part of the equation. Do political institutions and policies promote an assimilationist, segregationist or multicultural approach to minority participation? How do broader socio-economic and geopolitical changes affect whether ethnic minorities can expand their political voice and space? How do entrenched prejudices impact whether minorities can build political legitimacy among both minority and majority constituencies?

In 2014, both NDI and the NED wanted to know if their 10-year approach to political mainstreaming in Slovakia was effective, and if their assumptions held true over time. To answer these questions, they wanted to go beyond simply inventorying the results of the program. Instead, NDI wanted to engage Roma activists and leaders as analytical partners in answering more complex questions on political inclusion of ethnic minorities.

Why A Participatory Evaluation Approach?

NDI decided to use a Participatory Action Research (PAR) model to evaluate retrospectively its 10-year program, as an extension of its commitment to inclusive political processes. Similar to political inclusion, PAR models seek to empowerment those most directly affected by the issues under evaluation by engaging them in collective inquiry and decision making.  Therefore, the first step in the participatory evaluation would be to engage Roma program participants in defining the evaluation questions.

To that end, early last month, NDI held Participatory Analysis Sessions with Roma activists and leaders across Slovakia, reflecting on the contextual factors that have helped and hindered their political inclusion over the last 10 years. Most importantly, NDI wanted to identify evaluation questions of importance to Roma activists. The result of the Participatory Analysis Sessions are a set of questions that reflect the complexities of political mainstreaming at the local, regional and national levels, which have important implications for our understanding of the relationship between ethnic minorities, democratic development and the state.

Over the next 12-months, with support from the NED, NDI will partner with Roma leaders and activists to answer these evaluation questions. The participatory evaluation initiative will include a Roma Advisory Council and Roma research assistants as partners in designing the evaluation; collecting, analyzing and interpreting the data; and using the findings for collective action aimed at achieving equal representation and rights within Slovakia’s consolidating democracy.

Linda Stern
Linda Stern is the director of Monitoring, Evaluation and Learning at the National Democratic Institute. An applied anthropologist by training, she is an expert in action research methods and...