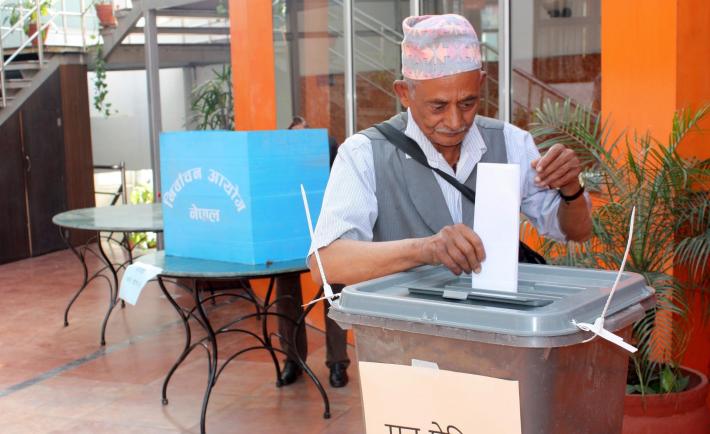 A political party participant casts his vote during a mock election exercise on April 25, 2017 in Nepal. Through mock elections, candidates familiarized themselves with the voting process in order to conduct more effective voter outreach. 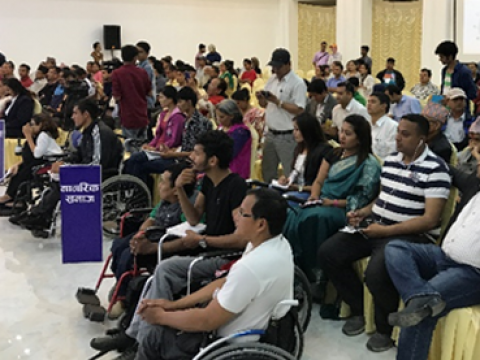 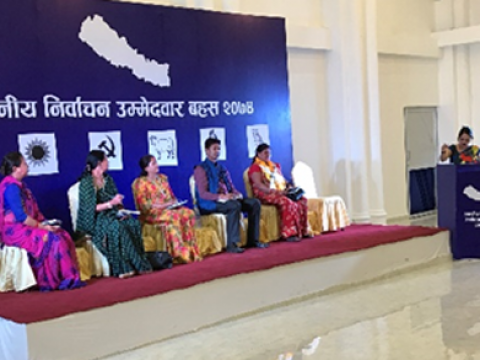 Deputy mayoral candidates of five major political parties listen to and answer questions from the audience, asked via the moderator. 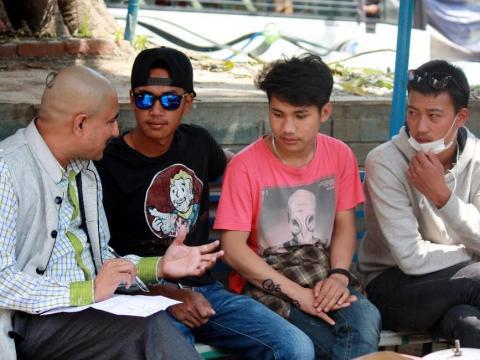 During an NDI training local election candidates were trained in the usage of a citizens survey questionnaire to better understand the priorities citizens have for their communities. After explaining the questionnaire candidates went to the street to tal 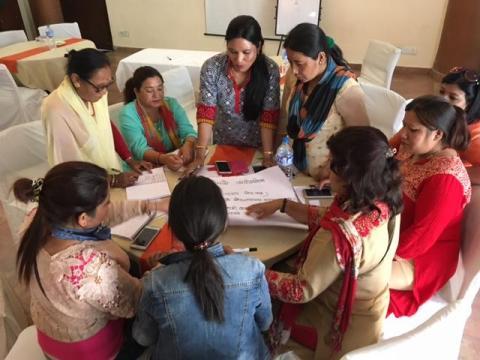 During a training for women candidates for local elections, a group of them are working on developing an effective canvassing script to use when they go door-to-door.
Prev Next

Since the end of its brutal decade-long civil war in 2006, Nepal has undergone a rocky, but peaceful democratic transition. The country has transitioned through the dissolution of its monarchy, the restoration of parliament, a devastating earthquake, the adoption of a new constitution, and the establishment of a federal republic. However, persistent poverty, the geographic isolation of many villages, and the marginalization of certain ethnic communities pose severe challenges to the nation’s economic and political development. Since the adoption of a new constitution in September 2015, significant progress has been made to improve government effectiveness, increase social inclusion and cohesion, and increase the responsiveness of the country’s representative institutions such as parliament and its political parties. Through on-the-ground engagement at each step in this time of change, NDI has worked to ensure that Nepali democracy reflects what matters to citizens, most recently in the country’s watershed local elections.

The announcement of local elections in February 2017 was an important step in the country’s transition process. The previous local elections were held 20 years ago in May 1997, making this a first-in-a-generation opportunity for Nepalis to choose their local representatives. Whereas national politicians are often consumed by national and partisan interests, local governing bodies are typically the first line of contact between citizens and their political representatives. In many democracies, good provision of local public services is citizens’ clearest signal that their leaders are engaged in meeting their day-to-day needs. The absence of effective political organization at the local level was felt especially hard by regions affected by the April 2015 earthquake, as government in these areas was unable to quickly identify and provide relief to the hardest-hit communities. Instead, many victims were left to cope on their own and have since received little support from the government.

In other words, more responsive, accountable and representative locally-elected officials are a critical first step in creating change, improving people’s lives and enhancing overall perceptions of the government, parties, politicians and the democratic processes. Without that progress, people lose trust in the institutions that govern them. Or as NDI Chairman Madeleine K. Albright frequently remarks,‘democracy has to deliver.’After much talk about the new constitution, many Nepalis have yet to see tangible results of the Constitution's implementation on their lives; citizens are growing impatient and frustrated with this lack of progress. In light of this, local elections should also be seen as a mechanism to build and regain trust and confidence among citizens that the Constitution is, in fact, being put into force.

Consequently, citizens rejoiced when the Election Commission of Nepal announced the three-phase election dates for May 14, June 28 and September 18. As the given timeframe to prepare for the first and second phases of the elections was only about two months, NDI moved quickly to organize and conduct candidate trainings and local debates. With four teams of party program staff and international consultants in the field simultaneously, the team conducted 45 trainings for local candidates in just six weeks’ time. These trainings focused on building practical and applicable political campaigning skills that the candidates needed to convince voters and run for office, such as developing canvassing scripts, organizing outreach activities to engage effectively with voters and learning to reach potential constituents by targeted district outreach. Moreover, NDI sent the candidates into the streets with pre-developed citizen survey questionnaires to underscore the importance of engaging average citizens, listening to their concerns, and understanding how to include that information in their outreach and communication. Lastly, as many voters would be seeing a ballot for the first time, the trainings helped candidates familiarize themselves with the voting process and ballot paper through mock election sessions. During these trainings, special attention went to women and youth candidates and candidates from marginalized communities, whose inclusion and political representation in the constitution and new federal structure has improved significantly through quotas -- designated seats ensuring a minimum level of representation for marginalized groups.

Of the 36,639 elected positions that will be filled during all three election phases, the quota system ensures that 13,360 candidates will be women and 6,680 will come from marginalized communities.

This number will likely increase after the election in the remaining province. In addition, 225 polling agent coordinators were trained and 10,000 polling manuals were developed and distributed to parties by NDI.

Finally, two mayoral/deputy-mayoral candidate debates were organized in Kathmandu and Pokhara -- Nepal’s two largest cities. These events allowed citizens to ask candidates about their platforms, and gave candidates the opportunity to share their ideas and vision with a broad audience. Constituents directly engaged their prospective leaders to better understand which may be best suited to champion the needs of their communities. Candidates also benefitted from the opportunity to hone their message and share their proposed solutions, gain a deeper understanding of the policies sought by Nepali voters. These debates were broadcast on national television, radio and social media (Facebook and Twitter); on social media alone, the debates got 37,000 views and reached tens of thousands more through traditional media channels.

These local elections are only the first step in a series of provincial and federal elections scheduled to occur within the next year. Fair elections and capable, representative local politicians and institutions will lay the foundation for Nepal’s further development and democratic transition. To achieve strong democratic institutions, it is important to foster citizens’ trust and hope for broader implementation of the Constitution. NDI will continue to support its partners to realize these objectives.