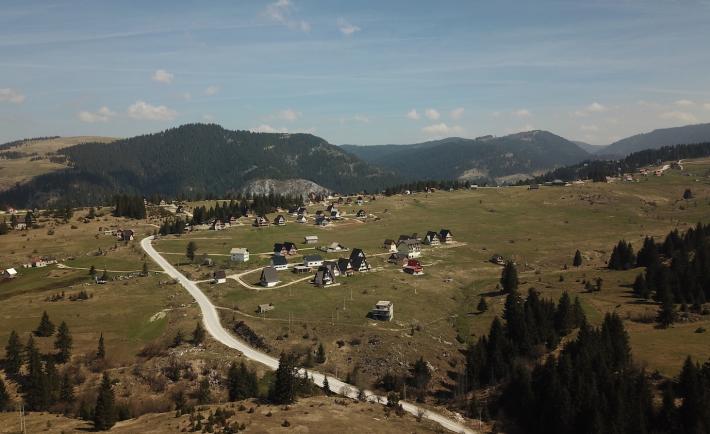 One evening in 1985, a little girl was born. As it is the case in Bosnia and Herzegovina, everybody first asks her name, and then they ask how much she weighs and how tall she is.

The name always comes first. Being born in Bosnia means that in every corner of the state the name - your name - is what marks you to which ethnic groups you belong. Belonging was important.

Babies are still being born under heavy shelling in hospitals without medication and electricity. The newborns' future is uncertain in those conditions. It is uncertain if they will survive, or whether they will be killed in the next hour. Still, the main question is: What's the baby's name?

Somewhere along the way someone decided that our name was the reason for ethnic division. A division that led to a war. War to suffering. Suffering to death. Death to hatred. Hatred to a future without a hope. And when you do not have hope in a better future it is easier to rule the masses, and pursue political and financial interests.

The little girl survived when others she loved did not.

The babies who were born in the second half of the 1980s and the first half of 1990s are growing up. Those who were lucky to grow up. People ask about their names. You need to know the name.

Today, I live in the Central Bosnia Canton, part of the Federation of BiH, which is a part of BiH as a country. I know. It is confusing. A state with two entities, an entity with 10 cantons. To shorten, we are a country of 3.5 million people, with 14 governments, 14 prime ministers and hundreds of ministers.

We've divided everything that could be divided, ranging from schools to political parties. I graduated from a school known as two schools under one roof, where Bosniak and Bosnian-Croatian students are educated separately and enter the school through different doorways. Bosniaks work according to the federal curriculum, while Croatians tend to work according to the curriculum used in Croatia. In the other entity, the Republic of Srpska, Bosnian-Serb students are educated according to a third curriculum. All these divisions exist side-by-side, often in the same towns. Everything seems to be divided by three: the three-member presidency, three languages, three ethnic groups.

When I became a participant, not an observer.

Freedom, equality and solidarity should not just be a catchphrase, but a guaranteed right to all citizens. After the horrifying events survived by today's youth in BiH, we learned the most valuable lesson: don't hate. In the country where war memories are still fresh, there are young people who do not want that to ever happen again. And at a very young age, I learned that I am equal and can determine my future. Following the return from my studies, I knew things were not how I wanted them to be in BiH. I didn’t like the fact that we are divided, that the unemployment rate is high and that only a few opportunities for youth exist. While some people tend to let things go and wait to see what happens, I did not want to be observer. I wanted to be a participant. I became involved in politics to stand up and make a change.

Most of the political parties in BiH have a Serbian, Croatian or Bosnian ethnic mark. I first became involved in the youth wing of my political party 10 years ago because it is one of the few multi-ethnic parties. Through the support of the youth wing, I won a seat in the Bugojno Municipality Council and in 2012 I became the youngest woman councilor ever in my municipality. Being a councilor gave me an opportunity to directly propose initiatives and solutions to certain problems that are under local community's jurisdiction. In 2015, I was elected as the vice president of my party’s Youth Forum and the opportunity to generate even more change arose.

The percentage of youth in political parties is only 5 percent, which might seem insignificant. Can that 5 percent make a change? Yes, they can. As evidence, we have a group of young politicians who, under the support of the National Democratic Institute (NDI), have the opportunity to educate themselves – to cooperate and find solutions for their problems and to lobby for them to be adopted. That was the part that meant the most to me. To learn about public policy, how to create one, how to present it to the public and how to lobby for it, alongside my colleagues.

Responsible, informed and active citizens are the foundation of democracy, and especially youth. Through the Youth Forum, NDI gathered young people from a majority of political parties in BiH. Young people with different names, ethnicities and religions showed up, sat together and said no to killing and hatred. NDI trainings and dialogues represent a possibility to develop political and media literacy and to familiarize oneself with elections, political actions and public policies. Young people from each ethnic group are given an opportunity to not only learn about politics but about themselves and the “other.” NDI offers a space to connect the unconnected.

There is no recipe for instant success.

The little girl at the beginning of the story dreams that her name will just be her name and not an indicator of ethnic belonging. Her father, who survived the horrors of the concentration camp, taught her not to hate but to love. To love her country and to love all people living in it. The girl at the beginning of the story becomes a politician. At least, she tries to be. She learns to be. She learns together with her colleagues from all over the country. Youth is the unmistakable power that can bring change and make the world a better place to live in. It is difficult, but not impossible. The past needs to be faced by a better future and together we can do it.

Irhana Cajdin
Irhana Čajdin is from Bosnia and Herzegovina (BiH). She is the current vice-president of the Youth Forum of the SDP in BiH and a member of the SDP-BiH General Board. Her profession is forestry...