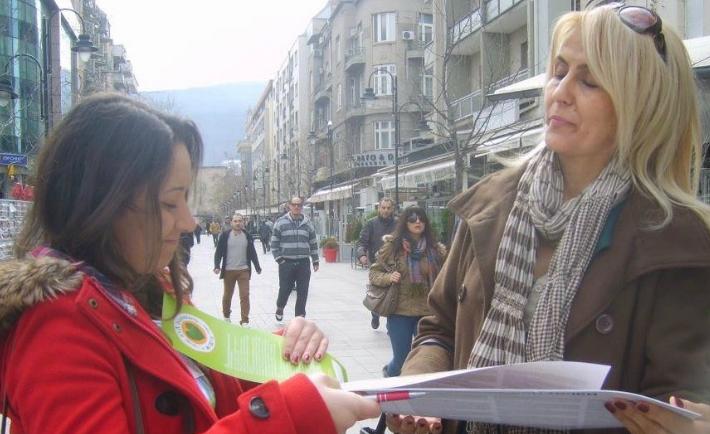 Environmental activist from Macedonia talks with a voter about campaign to clean up pollution sites ahead of the 2013 mayoral elections.

Elections are often treated by donors and development practitioners as discrete events that require process-oriented support; like ensuring registration, campaigning, voting and vote counting standards are met. There has been much less emphasis on putting elections to work to advance the collective socio-economic interests of citizens. Financial or technical support to strengthen an election process may result in one that is more inclusive and fair, but even the most credible elections do not guarantee a government that will address citizen needs.

Recently, we undertook a review of programs that show how elections can advance the collective interests of citizens. We compiled lessons from NDI programs in Malawi, Macedonia and Turkey to demonstrate the value of taking advantage of election periods during strategic campaigns. Our new website, Putting Elections to Work for Accountability, compiles the findings of the review and features case studies of campaigns in Malawi, Macedonia and Turkey. The website also details recommendations for democracy practitioners and activists and provides an overview of the tools used by civic groups featured in the case studies. The website makes this information easily sharable, interactive and multimedia.

Elections almost always provide the most accessible entry point for citizen participation in politics and evidence shows that, in large part, citizens do take advantage of the opportunity. According to a Pew survey, in 32 developing countries, voting was the most frequently cited mode of political engagement, with a median of 78 percent responding that they had voted in previous elections. At 75 percent, voting was most often cited as an effective way to influence government decision-making. These statistics indicate that even in less-developed democracies, with immature or vague processes, elections are viewed as a systematic, regular way for citizens to register their satisfaction with leaders or demand a change. Other opportunities for engagement, such as budget oversight or legislative advocacy, may exist in some places, but in general, elections are the channel most citizens choose to use when they want to make their voices heard.

Most often citizens register their satisfaction or discontent with parties, platforms and leaders by making a choice at the ballot box. But, the period of time leading up to an election also provides an opening for citizen groups to raise policy issues, secure commitments from candidates, build relations with like-minded groups, mobilize activists and increase the visibility of their issue. When political parties and candidates are competing for votes, they are often more open to interactions with citizens, and can be pressed to make commitments. This healthy competition can set the stage for post-election citizen engagement designed to hold newly-elected leaders accountable for their campaign promises, or to work with them on agreed-upon priorities.

Citizen engagement and party interactions put the concept of putting elections to work for accountability into tangible we say we want to put elections to work for accountability. It’s not just a matter of voting a leader in or out of office. Elections provide regular and systematic openings for citizens to engage in activism, which extends well beyond the ballot box. Putting Elections to Work for Accountability will provide some useful ideas for democracy practitioners who are interested in incorporating this approach into their programs.