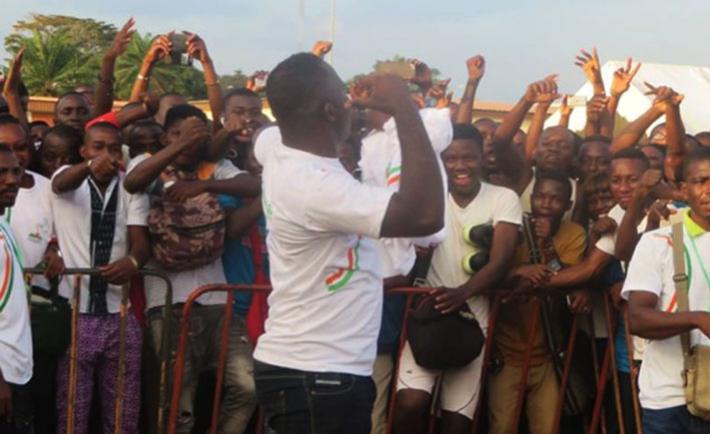 “Le Magnific” fires up the crowd at a concert for peace in Côte d’Ivoire.

Democratic elections resolve a legitimate competition for power through peaceful, rather than violent, means. They constitute a critical moment in the life of a democracy, where citizens have the right to express their will through the ballot box and a peaceful transfer of power takes place. However, this is not always the case.

Electoral violence marks a parting from the agreed upon national and international standards that govern the process. The electoral process has a number of potential flashpoints for violence before elections, including during candidate nominations, voter registration and the campaign period; voting and vote counting on election day itself; and after elections, especially when results are announced. During each phase, violence can disproportionately affect women, who face harassment, psychological abuse or physical or sexual assault up to four times the rate of male voters. In fragile environments, peaceful elections result from credible institutions that oversee the process. In these environments, NDI partners with local institutions to strengthen their ability to mitigate and prevent violence, allowing for the peaceful participation of all citizens in the democratic process.

During the 2010 elections in Côte d’Ivoire – the country’s first election in 10 years – former President Laurent Gbagbo refused to step down after narrowly losing in a run-off to Alassane Ouattara, triggering widespread violence that left over 3,000 people dead and thousands displaced. Women were disproportionately affected by the violence as they were more likely to be home and had less ability to flee when armed groups passed through towns. As the 2015 presidential election approached, an incomplete disarmament process and the widespread circulation of weapons in the country indicated that election-related confrontations could quickly spiral out of control. To mitigate the potential for violence in this fragile context, NDI assisted civil society organizations to monitor the elections, draft Codes of Conduct and spread messages promoting nonviolent conflict resolution.

Non-partisan citizen election observation is one tool that can reduce tensions and mitigate the potential for violence by providing timely, accurate information about the quality of an election process and the credibility of officially announced results. In advance of the 2015 elections, NDI assisted the Platform of Civil Society Organizations for Observation in Côte d’Ivoire (POECI) to observe the pre-election environment. Leading up to election day, the observation demonstrated that the risk of violence was actually quite low. POECI used this data to encourage citizens, especially women who reported being more afraid than men, to go to the polls. POECI focused on violence against women by integrating women into an observation effort to help ensure a more comprehensive understanding of the potential barriers to political participation that men and women face and the distinctive ways electoral violence affects citizens. Forty percent women of the observers POECI recruited were women. In cases where tensions arose, observers issued alerts of critical incidents of violence, which allowed authorities to appropriately respond and prevent escalation.

On election day, POECI conducted a parallel vote tabulation (PVT), in which observers deployed to a random representative sample of polling stations to collect data on the voting process and vote counts throughout the country. The observation allowed POECI to confirm that the officially announced national election result fell within the statistical range predicted by the PVT based on vote totals posted in the sampled polling stations. POECI concluded that the electoral environment proved to be largely peaceful and the process credible.

Election commission Chairman Youssouf Bakayoko told NDI that "Because of POECI's PVT, there was no fighting in the country [over the election]."

Lesson 2: Create Agreements of Non-Violence by Developing Codes of Conduct

Codes of Conduct create agreements of non-violence and adherence with election standards between opposing political groups. Prior to the 2015 elections in Cote d’Ivoire, NDI supported political parties in developing a Code of Conduct that committed candidates and parties to peaceful campaign conduct. A neutral coalition of civic groups monitored adherence to the Code and took action to prevent violence, including mitigating the use of inflammatory language that might incite ethnic tensions or violence. In the weeks leading up to the election, the coalition shared copies of the Code and, where possible, convinced local party leaders to abide by it. By the end of the campaign period, the number of Code violations had reduced significantly, and in a show of support for nonviolent elections, the two main parties held a joint rally calling for peaceful elections.

With memories of the 2010 post-election violence still fresh for many Ivoirians, an expectation of peaceful polls was important to ensure voter participation. To get young people enthusiastic about the elections and encourage them to engage peacefully, NDI and local partners undertook a multimedia campaign called “C’est dans l’enjaillement que je vote” – “I vote in jubilance.” Popular comic Bah Jacques Silvère (known as “Le Magnific”) served as the face of the campaign. He headlined concerts where youth heard songs, comedy and slam poetry, received t-shirts that proclaimed them as jubilant about voting, and signed a pledge promising to vote peacefully. Clips of le Maginific’s song, bearing the same name as the campaign, aired on radio stations in advance of the election, and the music video was also aired on the state television network.

Outside of  Abidjan, grassroots organizations adapted peace slogans to the local context in violence “hotspot” areas and promoted the slogans through radio programming, street theater, security forces training, and community events. In Agboville, where there was a heightened risk of confrontation between opposing parties, the Municipal Youth Union of Agboville organized discussion groups that allowed youth from political parties, who formerly were unable to interact peacefully, to engage in dialogue.

Elections are critical moments for democratic nations, and election related violence hinders the participation of citizens in the process. NDI supports national and local actors to mitigate and prevent violence at various stages of the electoral cycle. This effort enhances the legitimacy of democratic institutions and enables the will of the people to be expressed through the ballot box rather than violence.

Lindsay Robinson
For the last seven years, Lindsay has been assisting democracy programs with NDI in Sub-Saharan Africa, including in Central African Republic, Côte d’Ivoire, Mali, Nigeria, and Sierra Leone.
Connect with the author
LinkedIn
NDI