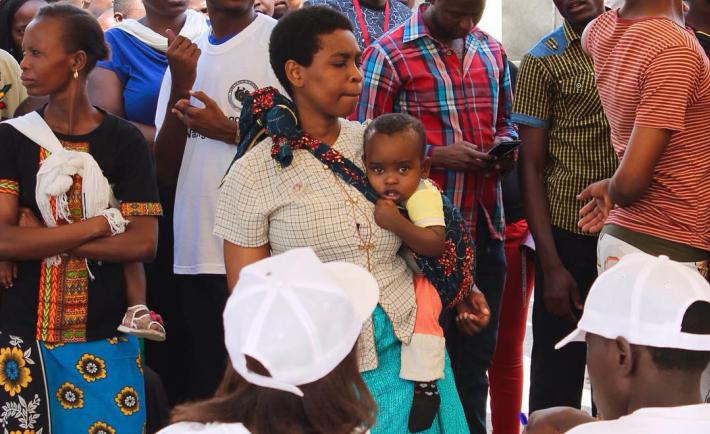 Voters at a polling station in Tanzania on October 25, 2015. Credit: Monika Emch

Democratic elections are a fundamental way to peacefully resolve political competition. However, they are also high-stakes games where power is won and lost that can result in conflict and descend into violence. Although such violence affects all citizens, it has a particularly sinister impact on women. Since January alone, the world has seen politically active women stripped publically by police on their way to political and election events, decapitated and stabbed. Their vehicles have been damaged and their campaign materials destroyed. They are denigrated as “eye candy” and accused of having made sex tapes. Election officials and observers have faced violence in their work, and women voters are dismissed by the very parties seeking their votes with sexist language and jokes, or are banned from voting at all.

Such violence cannot be simply dismissed as the “cost of doing politics.” Violence against women in elections (VAW-E), while historically overlooked, is increasingly recognized as a significant barrier for women across the globe.

NDI has been conducting a global “Votes Without Violence” campaign to raise awareness of the problem, improve data collection on the issue and develop guidance on how to address violence once it’s been recognized. While existing resources and research are limited, the incidents seen this year alone underscore the need to fill the gaps in our collective knowledge and better address the phenomenon. Through its campaign, NDI has been working to fill those gaps, collaborating with civil society groups observing elections in Guatemala, Nigeria, Burma, Tanzania and Côte d’Ivoire to improve the way VAW-E is tracked and prevented.

Last Sunday, we saw three of those five countries head to the ballot box, as Côte d’Ivoire, Guatemala and Tanzania all voted for new representatives. The overall news emerging from the election observations that NDI supported was positive: the general levels of violence were low, and there were no reports of widespread violence targeting women. This absence of violence can actually serve to underline the importance of including a focus on VAW-E in election observations -- just because there was no widespread violence observed doesn’t mean it wasn’t worth monitoring. It can be equally important to report on the lack of violence, especially in places with a history of conflict. We saw this in Côte d’Ivoire, where before the observation began, women reported that they weren’t planning to participate in elections because they believed that doing so would put them in danger. By reporting accurately that elections are occurring peacefully, observers can support women making the decision to vote or run for office.

In other cases, data collected on violence that is happening can provide hard evidence that women are being systematically targeted by violence in ways that previously had only been collected as anecdotes. In Guatemala, observers working throughout the run-up to the national election in September and the presidential runoff last Sunday were able to report on data indicating that women are far more targeted and affected by political clientelism and coercion than men. Before this observation, women’s rights groups had suspected but were unable to prove that this kind of violence had affected women on a large scale. Shedding light on the real levels of violence impacting women can be critical, especially in cases where the absence of data is used as evidence to deny that VAW-E is occurring at all.

This targeted focus on women can also improve the diversity of the observers themselves, not just their sensitivity to gender-based violence. In Côte d’Ivoire, we supported our domestic observation partners in their efforts to ensure that the observation team itself was inclusive. As a result, half of the observation supervisors and over 40 percent of the observers recruited were women -- the best percentage ever achieved in Sub-Saharan Africa by an NDI partner. In Nigeria, which has local elections fast-approaching, NDI assisted observers in collecting data on the gender of election officials and administrators, which is rarely collected and can be combined with other data to provide information on the environment in which female election officials have to work.

The lead up to these elections showed that our Votes Without Violence campaign is having a positive effect on each phase of the election cycle, improving observation methodologies and women’s participation as voters, candidates, party agents and poll officials.

But this is only the beginning. Our goal is to fully integrate the knowledge and practice of monitoring and mitigating VAW-E into all electoral processes, everywhere, ensuring that women around the world are able to exercise their full and equal right to participate.

“It’s women that are the mobilizers,” said a Nigerian focus group participant on VAW-E in Nigeria this month, adding: “[w]e’ve been used as cheerleaders for too long.”

Join us in declaring that it’s past time to eliminate all kinds of violence used against women to keep them out of elections: share this story, and join us to raise awareness about the issue on Twitter using the #VotesWithoutViolence hashtag .