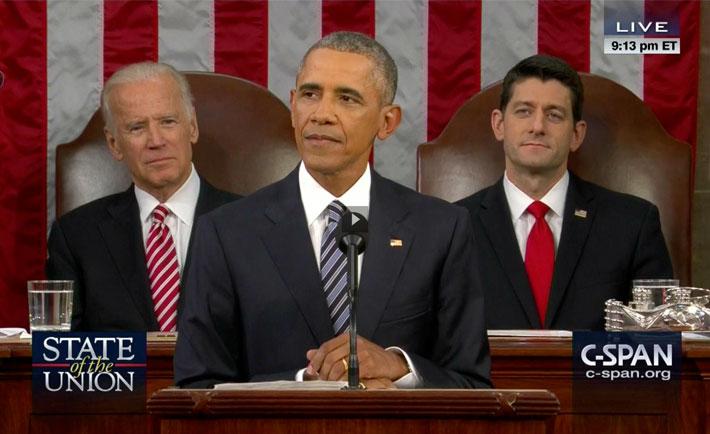 Caption: President Barack Obama, flanked by Vice President Joe Biden (left) and House Speaker Paul Ryan (right), delivers his eighth and final State of the Union (SOTU) address. In addition to listing his policy goals and accomplishments, the President provided a counter-narrative to hyperbolic election-year rhetoric and a reminder of the strength and resiliency of America’s democratic political system.

As a politics nerd, there was no question that I would spend Tuesday night on my couch, listening to the State of the Union (SOTU) address. As someone who has made a career in democracy assistance, the speech held even greater significance: it was an example of democracy in progress.

I have worked in support of democratic progress around the world since 2011 and joined NDI in fall 2013. The world has changed a lot in those 27 months. I watched historic first elections and shared in the joy of first-time voters. To see these hard-won successes gives me hope. But in countries where violence and instability are facts of life, these successes are hard to come by and even harder to hold onto.

President Obama reminded me not to despair when I observe democratic backsliding -- after all, our own democracy is still developing. The Preamble to the U.S. Constitution famously calls for creating a “more perfect union,” insinuating that democracy is a work in progress, which can always be made better. President Obama reiterated this point on Tuesday:

"Democracy...require[s] basic bonds of trust between its citizens. It doesn’t work if we think the people who disagree with us are all motivated by malice, or that our political opponents are unpatriotic...Most of all, democracy breaks down when the average person feels their voice doesn’t matter; that the system is rigged in favor of the rich or the powerful or some narrow interest."

“Our brand of democracy is hard,” Obama said of the challenges of participatory democracy in the United States. Though we have been growing our democracy for 200 years, we still face setbacks, deadlock, and even what democracy specialists might call “backsliding.”

Some developing democracies face these challenges on a much larger scale. But that doesn’t mean we should stop supporting the quest of other countries to seek more inclusive and democratic government. Obama reminded the public on Tuesday, “In today’s world, we’re threatened less by evil empires and more by failing states.” The important work that NDI and its partners are doing to support democratic elections, build political systems and govern effectively paves the way for freedom and prosperity around the world. It makes me proud to be a participant in democratic progress in the United States and and proud to work for NDI -- an organization that supports democratic progress the world over.

Nina Jankowicz
Nina joined NDI in 2013, working for two years on the Institute's Russia and Belarus programs. In Fall 2015, she joined the Government Relations and Communications team, bridging her passion for...
Connect with the author
LinkedIn
NDI