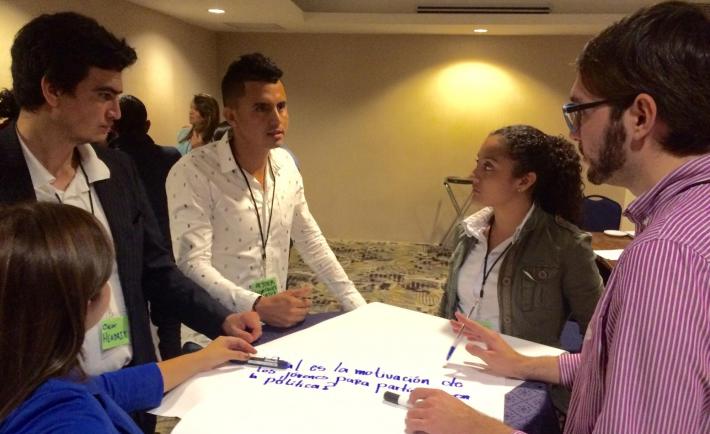 Twelve young Latin American political leaders and activists recently gathered in Guatemala for an NDI-led workshop on youth political participation. Conversations ranged from what motivates youth to get involved in politics, to how sociocultural norms about youth affect their work, and what tactics youth have used to elevate their political voices in their home countries of El Salvador, Colombia, Guatemala, Honduras, Nicaragua and Mexico. Amidst widespread myths about youth political apathy, these diverse young activists represent a generation that is motivated to build more inclusive, democratic societies.

Despite their varied backgrounds and national origins, participants reported similar biases that challenged their work, including the notion that youth are apathetic and incapable of political action beyond street protests. The truth is often the opposite. Young people are eager to solve critical issues facing their communities, but entrenched political leaders are reluctant to share power to find solutions. Youth who take a public stand against corruption by politicians have been threatened or even killed. These dynamics feed youth frustration and feelings of hopelessness and fear about politics, which perpetuate negative stereotypes that contribute to their political exclusion. 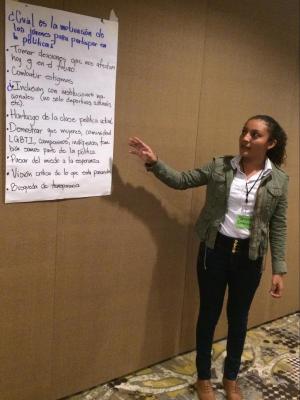 For those at this workshop, however, this injustice and discrimination is precisely what fuels their work. A female participant from Honduras said “We do this work because we are sick of robbers being in power and getting re-elected, despite their unjust actions. The previously accepted norm of corrupt politics is not ok with our generation.”

These youth believe in their abilities to create democratic societies that include and respect the rights of all citizens. Rather than mourning challenges they face in politics, they relish hope from incremental victories. A participant from Mexico found encouragement in his recent involvement in a successful campaign for a young person’s election to the Jalisco State Congress. Another participant from a youth-led organization in Colombia has persisted in efforts since 2013 to push for implementation of a law that promises local-level platforms for youth to participate in political and community affairs.

Common issues of concern across national lines also arose -- most notably security and employment. To these youth, security and employment issues are not mutually exclusive, as security does not just mean curbing gang violence and organized crime. Security means being able to access medical care without having to pay a bribe, having equal opportunity to get a university education and find a job afterward, receiving public information guaranteed to them by law like information on government spending, and a variety of other issues that they see as their rights as citizens and humans.

Participants’ experiences also demonstrated how individual identity and needs motivate youth to get involved in politics. When talking about why he got involved in politics, a young Mayan man cited his drive to fight government corruption and discrimination that prevents the funding of basic services for indigenous communities in Guatemala. A young transgender woman from Guatemala described wanting to push for employment protections for lesbian, gay, transgender and intersex people, and to ensure that transgender people can change their identification cards to reflect the name and gender with which they identify.

The youth at this event are an example of how many small groups of people, in many small places, doing small things can change the world. They repeatedly agreed that, in order to change their societies for the better, more youth need to “pasar del miedo a la esperanza,” or “move from fear to hope.” These inspiring activists believe in a bright future for their generation, and they are leading the charge to achieve it.

NDI is drawing lessons from this event and discussions with other youth around the world to inform new approaches for supporting youth political participation.