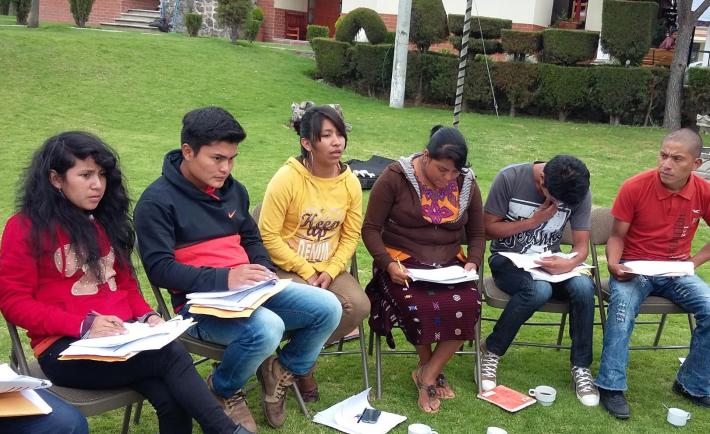 Milvia Roxana Lopez (third from left) speaks during a training for citizen election observers in Guatemala. “Self-confidence was key,” she said, referring to her ability to break through gender-based stereotypes as an election observer documenting incidents of violence and educating voters during last year’s historic elections.

Milvia and her fellow observers in the western region of Guatemala study the observation forms. 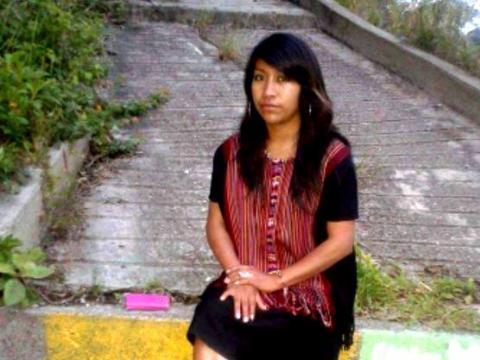 At 25 years old, Milvia Roxana López, an indigenous woman, may be diminutive in size but she exudes a confidence that demands she be heard. As an observer who monitored electoral violence, Milvia met with leaders from her town and surrounding communities to document acts of electoral violence -- not an easy topic to broach in country that has one of the highest homicide rates in the world.

“For me, self-confidence was key,” declared Milvia, referring to her role as an election observer. “To many people, it’s not the same when a woman says something as when a man says something. I don’t know where I got the strength, but I did it.”

Based in Colotenango in Guatemala’s mountainous western highlands, Milvia and another observer traveled to remote communities to meet with advisory councils made up of local leaders that were convened to verify observation information. Interviewing these leaders on a regular basis, Milvia documented incidents of electoral violence. Milvia then shared her findings with the local organization that supported her, the Center for Studies and Documentation of the Western Border of Guatemala (CEDFOG), which in turn shared the data from all of its observers with a national umbrella organization, Citizen Action (AC).

Milvia and her observation partner had to spend time earning the trust of community members.

This process continued weekly for four months in advance of, during, and after the September 2015 general election and the October run-off. In total, 140 observers met with more than 1,300 community members in 340 communities across 20 municipalities to document electoral violence and campaign spending. AC compiled and shared the data with electoral authorities and law enforcement officials to take appropriate action to address potential violations of campaign finance law or acts of violence. Milvia and her fellow observers’ community work, therefore, had a national reach.

Violence is a sensitive issue, which leaders rarely discuss openly. Although Guatemala's 36-year internal conflict ended with the 1996 Peace Accords, it left the country deeply divided, and those who might wish to speak out continue to fear reprisals. Milvia and her observation partner had to spend time earning the trust of community members. Beyond collecting election data, observers engaged in civic education by providing information to, and respond to questions from, citizens regarding the electoral process to help citizens better understand their rights.

The approach worked, and over time Milvia noted that more people were speaking up during council meetings, even daring to voice concern about violence in their communities. This was especially true of women who had been hesitant to participate in something that they perceived as too political. Milvia was particularly proud that women in her community are starting to insist that they have the right to participate politically.

Nationally, the elections saw historically high levels of participation. The elections were also some of the least violent since the country’s transition to democracy in 1985, which many credit in part to intense public scrutiny, such as the domestic long-term observation efforts, in the lead up to election-day.

In Colotenango, Milvia reflected this sentiment, stating that she felt that her efforts, and those other fellow observers, helped make the elections safer for people to participate. She delighted in the opportunity to branch out to new communities, which is an important step in breaking down the country’s divisions.

“The most rewarding part of the experience was being able to visit new communities and understand different realities,” Milvia said with a large, genuine smile. “It was my first time in many of these communities and it was very fulfilling to be able to meet people and share this experience with them.”