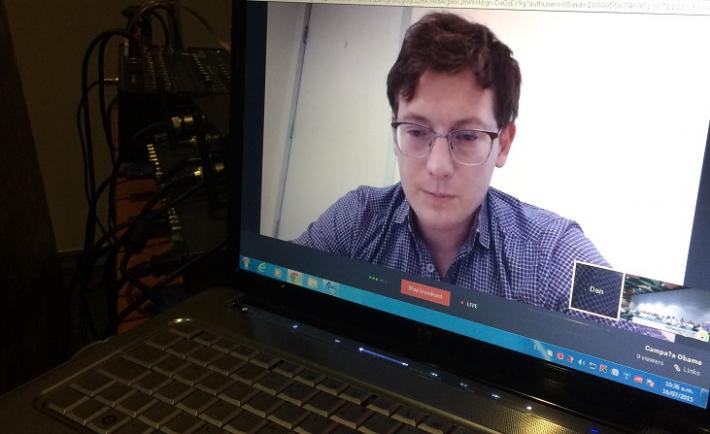 Dan Wagner, CEO of Civis Analytics and National Analytic Director for the 2008 and 2012 Obama campaigns, participates in a Red Innovación Google Hangout on campaign strategies.

In a field saturated with activists and NGOs working toward transparency, accountability and democratic governance, groups are challenged to avoid duplicating efforts or “re-inventing the wheel.” Since its launch three years ago, online platform Red Innovación has helped activists throughout Latin America efficiently share tools and materials that contribute to political reform and good governance initiatives. In honor of next month's launch of the new Virtual Diploma in Communication Policy, hosted by Argentine partner Civil Association of Popular Studies (Asociacion Civil de Estudios Populares, ACEP) in partnership with Red Innovación, and which will provide training on new communications strategies, here is a recap of Red Innovación’s successes.

Red Innovación, which means “Innovation Network” in Spanish, uses open source learning management systems, Google Hangouts and instructional exchanges to facilitate trainings for regional activists on new political reform tools and methodologies. Red Innovación takes advantage of the relationships NDI has cultivated with party and civic leaders in a dozen countries across the region to provide a wide audience with access to a clearinghouse of tools and ideas.

The Red Innovación platform can inspire regional activists with case studies that outline regional lessons learned and suggest best practices they can use to design and carry out their own reform initiatives. For example, when Bolivian activists recently approached NDI for training on social media tools, the Institute was able to direct them to multiple related trainings on the Red Innovación website. Both NDI and the activists saved time, and the activists received the information they needed in an easily accessible format.

Live and recorded video conferences cover a wide variety of topics, such as low-cost strategies for communicating with citizens, the role of think tanks in politics and policy making, technology tools for advocacy and cyber security tips. Red Innovación also facilitates virtual exchanges, allowing for two-way communication and collaboration among organizations. In one session, Guatemalan and Colombian youth groups shared youth mobilization techniques; in another, Argentine and Mexican organizations traded best practices regarding political finance regulations. The demand for access to these materials and opportunities continues to grow.

Red Innovación has also sponsored in-person training exchanges that have resulted in revisions in party practices, such as improved use of youth mobilization, social networking and participatory platform tools, and changes in political reform legislation based on case studies and practices shared from countries in the region.

The in-person regional exchanges have also contributed to introducing and consolidating networks and modifications in practices among participating organizations and legislatures. A networking session conducted this January resulted in continued consultations between the secretary general of the Presidency of Chile and the Mexican Electoral Institute. Similarly, an exchange last December led to an Ecuadorian political organization establishing women and youth wings.

Sarah Stern
Sarah Stern is a senior program assistant for the LAC team at NDI.
Connect with the author
LinkedIn