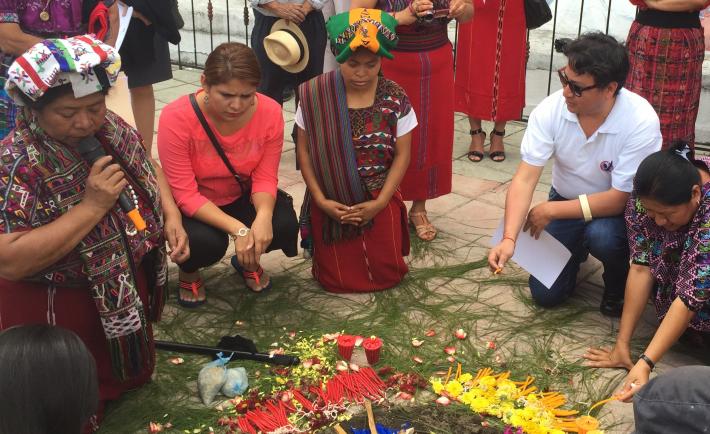 A Mayan ceremony celebrating the launch of the “Less Violence, More Inclusion” observation effort in Nebaj, Quiche, Guatemala, to reduce election violence and illegal campaign activity leading up to the Sept. 6 presidential election. 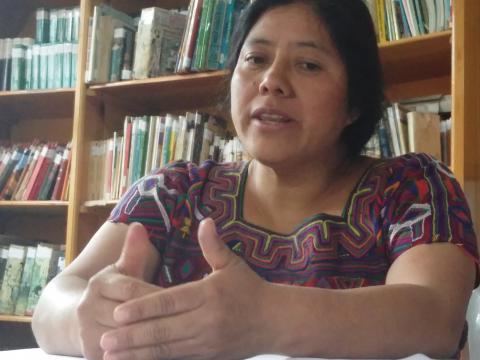 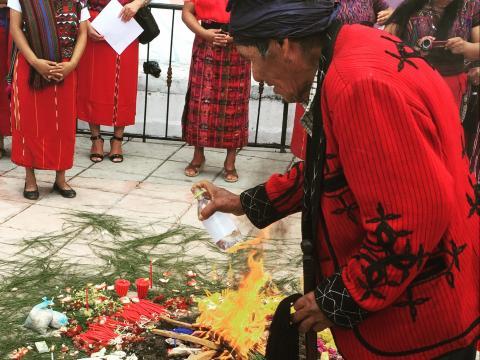 An indigenous ancestral leader participates in the inaugural ceremony. 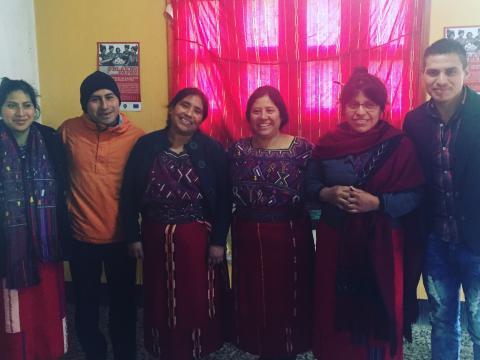 Members of the Network of Ixil Women.
Prev Next

The Network of Ixiles Women is based in Nebaj, which is located in a remote valley in the Ixil area of the department of Quiché, Guatemala -- a region that is predominately Maya-Ixil. The organization was one of 13 local groups that partnered with Citizen Action (AC) to observe electoral violence and campaign spending across 20 municipalities.

We recently spoke with the organization’s coordinator, Juana Baca, as well as two observers, Paula Ramírez and Andrés Saquic, about their experience participating in the “More Inclusion, Less Violence” electoral observation network.

Although the Network of Ixiles Women focuses on promoting women’s civic participation and providing support to victims of violence, it saw an inherent link between its principal work and a role in monitoring the elections. “The focus of the organization is on collectivity,” Juana said. “We focus on working with survivors of gender-based violence. This violence extends to politics, and we wanted to address this in our community. We saw this project as complementing the work of our organization.”

Violence against women is an entrenched problem in Guatemala, which has one of the highest rates of femicide in the world. In addition to focusing on electoral violence generally, the observation included a specific focus on gender-based electoral violence. The AC observation was part of NDI's "Votes without Violence" program that aims to support citizen election observers to monitor and mitigate violence against women during elections -- a major barrier to women's political participation.

“Women are vulnerable in politics. We need more spaces to share information so that women understand what is political violence and what is gender-based violence and that neither are acceptable.” - Juana Baca, Network of Ixiles Women Coordinator

Electoral violence against women is found in public as well as private spaces, and can range from physical confrontations or sexual assault to discrimination, harassment and psychological abuse. It discourages women from being or becoming politically active and undermines democratic processes. For example, in Guatemala, women have been forced to participate in political party rallies, or threatened with the loss of social benefits administered by elected officials if they do not register with a certain party or pledge to vote for a particular candidate.

While both men and women can experience political violence, women are often more vulnerable to and impacted by attacks, especially if they are the ones receiving the social benefits. “Politicians have used social programs to perpetuate violence against women and women are conditioned to think that this is normal,” said Juana.

The Network of Ixiles Women decided to conduct its observations in communities within Nebaj and Cotzal that have experienced high levels of electoral conflict in the past. The group understood that its observers faced risks such as confrontations and intimidation from party militants. Despite the risks, observers believed that their presence could serve to prevent violence, and provide a voice for victims whose rights are violated.

“Our interest in being observers came from seeing the violence and division that goes on in communities during the electoral period,” Paula and Andrés agreed. “As observers, we wanted to help reduce violence.”

In addition to observing gender-based violence, the project also sought to include women as meaningful participants. Of the 140 observers in AC’s network, 54 percent were women -- well above global averages for election observation networks and reflective of the observation’s inclusive approach. In addition, 30 percent of the nationwide network was indigenous. Within predominantly indigenous communities, such as Nebaj and Cotzal, 100 percent of the observers were indigenous.

Many of the observers had a leadership role within their organizations and saw their profiles raised within their communities as a result of the observation. They were approached for advice as knowledgeable political leaders. Having observers who were representative of the communities they monitored was important to gaining trust and encouraging all citizens to speak out.

Both Paula and Andrés agreed that serving as observer augmented their leadership within their community. “The women trusted us and felt comfortable asking us how to respond to situations that they knew were not acceptable. And we were able to support them,” they concurred.

This type of inclusive and trust-based observation is crucial in a country like Guatemala, in which a history of violence has resulted in a legacy of fear and silence. The country’s 36-year internal conflict left approximately 200,000 people killed or missing, a majority of whom were indigenous people. Guatemalan women, and especially Mayan women, were targeted and suffered horrific violence as a result of the conflict. Although 1996 peace accords ended the internal conflict, the country has not overcome the conflict’s violent legacy. The Ixil communities were and continue to be particularly impacted by this violence. There is also still a legacy of impunity from the law and of exclusion of women and indigenous peoples from political participation.

While many issues have yet to be solved, historic public protests in 2015 and recent legal cases demonstrate the extent of citizen discontent with systemic corruption and impunity and provide hope that those who perpetrated violence will be held responsible. In January 2016, 14 ex-military officers were detained over charges of crimes against humanity. And in February, a high profile trial found two former military officers guilty of charges of sexual slavery of indigenous women, marking the first successful prosecution for sexual violence committed during the conflict.

Speaking out in this context takes courage, and the Network of Ixiles Women embodies this courage. “You need to understand violence as individual acts,” said Juana. “Women are vulnerable in politics. We need more spaces to share information so that women understand what is political violence and what is gender-based violence and that neither are acceptable.”